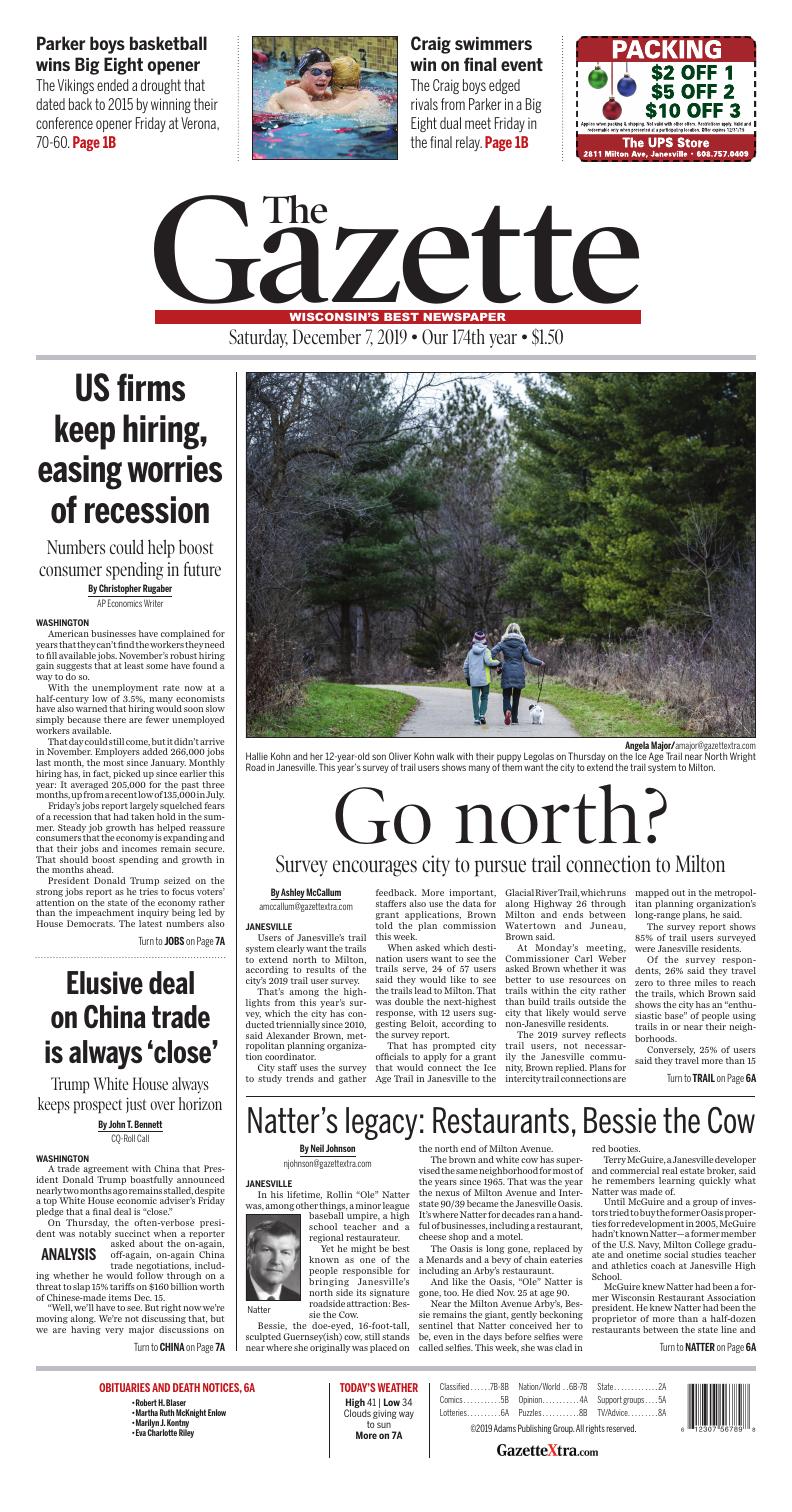 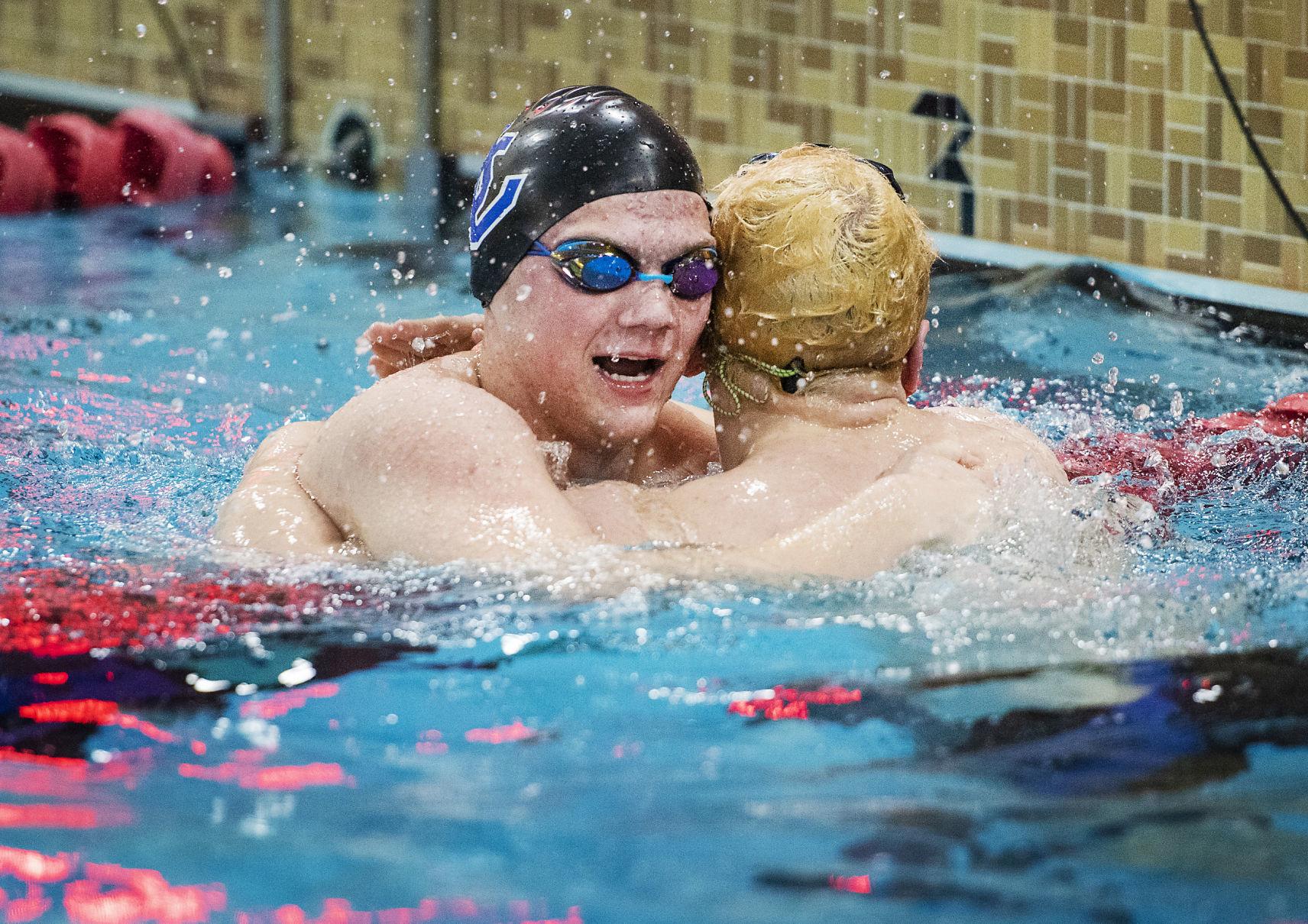 Hallie Kohn and Oliver Kohn, 12, walk with their puppy, Legolas, on Thursdayon the Ice Age Trail near North Wright Road in Janesville.

Users of Janesville’s trail system clearly want the trails to extend north to Milton, according to results of the city’s 2019 trail user survey.

That’s among the highlights from this year’s survey, which the city has conducted triennially since 2010, said Alexander Brown, metropolitan planning organization coordinator. 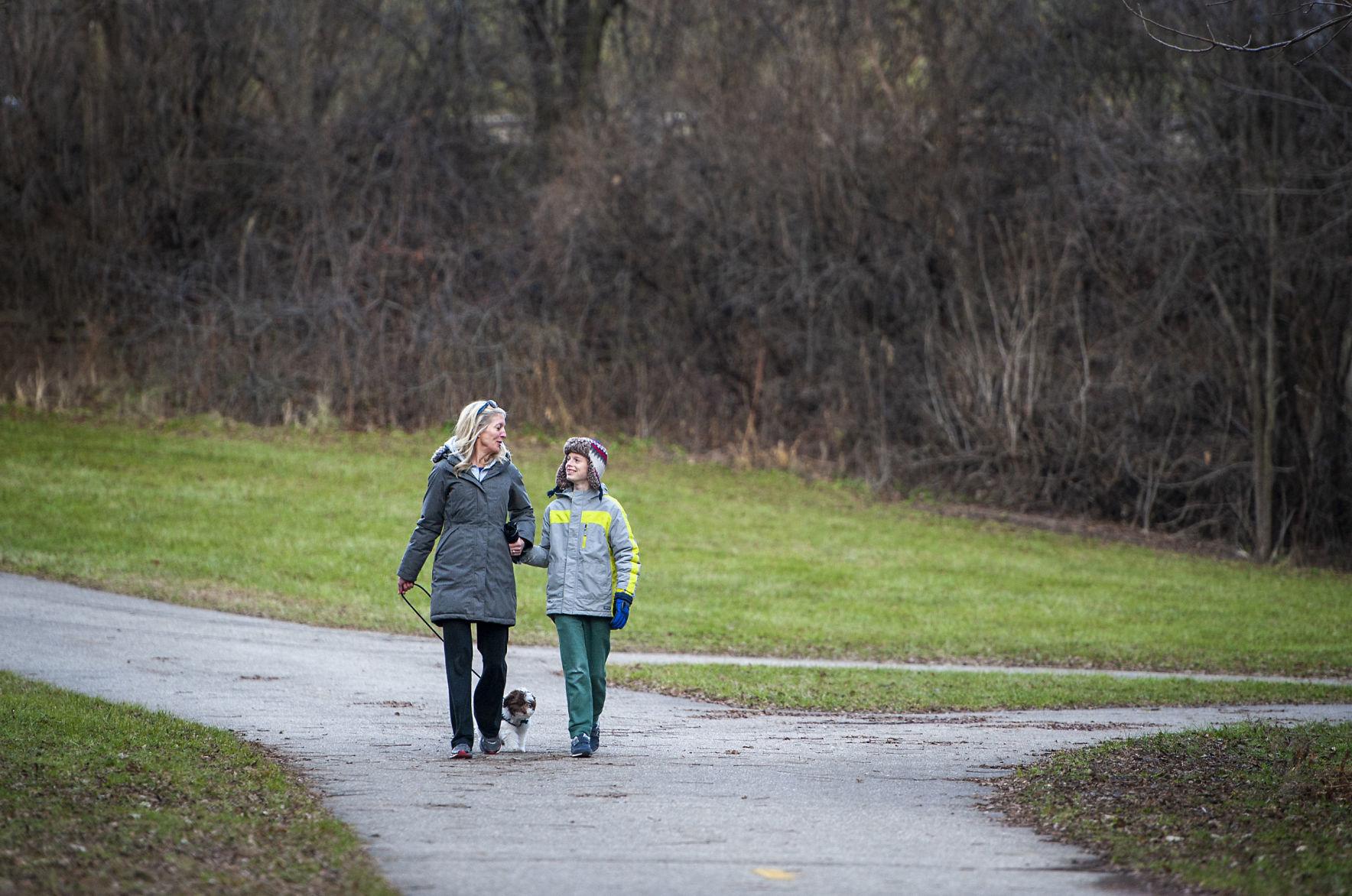 Hallie Kohn and her 12-year-old son Oliver Kohn walk with their puppy Legolas on Thursday on the Ice Age Trail near North Wright Road in Janesville. This year’s survey of trail users shows many of them want the city to extend the trail system to Milton.

When asked which destination users want to see the trails serve, 24 of 57 users said they would like to see the trails lead to Milton. That was double the next-highest response, with 12 users suggesting Beloit, according to the survey report.

That has prompted city officials to apply for a grant that would connect the Ice Age Trail in Janesville to the Glacial River Trail, which runs along Highway 26 through Milton and ends between Watertown and Juneau, Brown said.

At Monday’s meeting, Commissioner Carl Weber asked Brown whether it was better to use resources on trails within the city rather than build trails outside the city that likely would serve non-Janesville residents.

The 2019 survey reflects trail users, not necessarily the Janesville community, Brown replied. Plans for intercity trail connections are mapped out in the metropolitan planning organization’s long-range plans, he said.

Of the survey respondents, 26% said they travel zero to three miles to reach the trails, which Brown said shows the city has an “enthusiastic base” of people using trails in or near their neighborhoods.

Conversely, 25% of users said they travel more than 15 miles to get to the trails, according to the report. 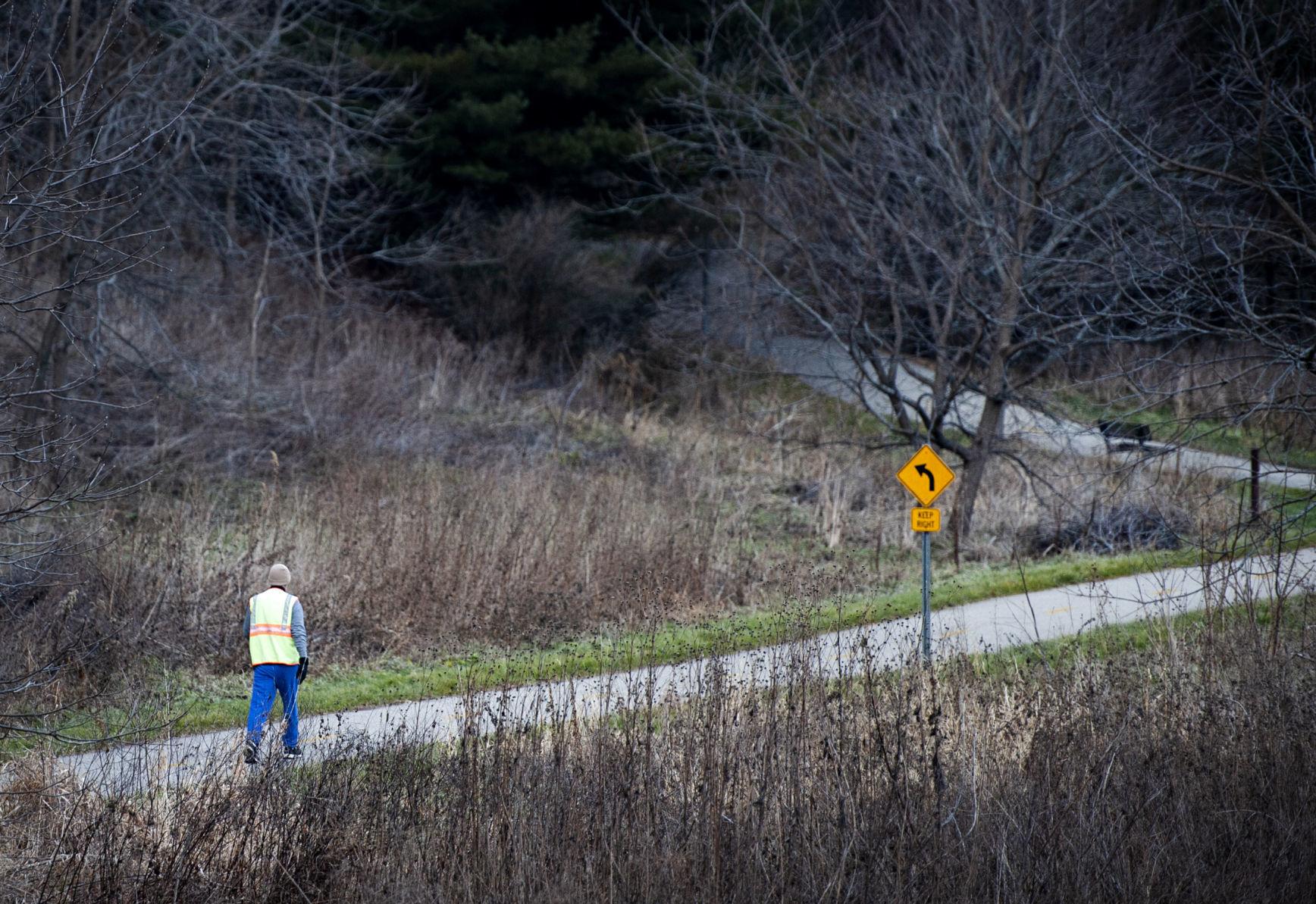 A man walks along the Ice Age Trail on Thursday near North Wright Road in Janesville.

The city’s 2010 survey showed a difference in men’s and women’s perception of safety on the trails.

The city saw positive change in closing that gap this year, Brown said.

Respondents who said they feel neutral about safety were asked what could be done to make them feel more comfortable. Only women responded to the question, according to the report.

Some women said they felt unsafe using the trails at night and that they felt safer with another person, according to the report.

Multiple women suggested more police presence, lights and cameras on the trails would make them feel safer, according to the report.

The report suggested that it’s possible people who feel relatively safe on the trails are the ones using them, and those who don’t feel safe don’t use the trails at all.

The report also noted that more men were surveyed than women, meaning the “concerns of women are diminished in the overall statistics.”

The survey report reveals this information:

A 2005 Gazette photo shows the Oasis Restaurant and Gift Shop and its iconic, giant cow, Bessie, as the property was changing hands for redevelopment. The owner of the property, Rollin ‘Ole’ Natter, was responsible for bringing the cow, a well-known roadside attraction, to the Oasis.

In his lifetime, Rollin “Ole” Natter was, among other things, a minor league baseball umpire, a high school teacher and a regional restaurateur.

Yet he might be best known as one of the people responsible for bringing Janesville’s north side its signature roadside attraction: Bessie the Cow.

Bessie, the doe-eyed, 16-foot-tall, sculpted Guernsey(ish) cow, still stands near where she originally was placed on the north end of Milton Avenue.

The brown and white cow has supervised the same neighborhood for most of the years since 1965. That was the year the nexus of Milton Avenue and Interstate 90/39 became the Janesville Oasis. It’s where Natter for decades ran a handful of businesses, including a restaurant, cheese shop and a motel.

The Oasis is long gone, replaced by a Menards and a bevy of chain eateries including an Arby’s restauraunt.

Near the Milton Avenue Arby’s, Bessie remains the giant, gently beckoning sentinel that Natter conceived her to be, even in the days before selfies were called selfies. This week, she was clad in red booties.

Terry McGuire, a Janesville developer and commercial real estate broker, said he remembers learning quickly what Natter was made of.

Until McGuire and a group of investors tried to buy the former Oasis properties for redevelopment in 2005, McGuire hadn’t known Natter—a former member of the U.S. Navy, Milton College graduate and onetime social studies teacher and athletics coach at Janesville High School.

McGuire knew Natter had been a former Wisconsin Restaurant Association president. He knew Natter had been the proprietor of more than a half-dozen restaurants between the state line and the Dells area, including Wisconsin Dells Burger bar, Mr. Pancake, Norse Chalet and the Red Apple—located in Newville, where a giant, metal apple with a bite out of it still stands.

It was through the Oasis properties—some of which Natter ran into 2000s—and McGuire’s negotiations to buy those properties that McGuire learned who Natter really was.

“I found him to be…I don’t want to say crusty. He wasn’t,” McGuire said. “He was tough, a tough negotiator. But he was fair.”

McGuire said he saw a human dynamo in Natter, and he grew more impressed the more he got to know the man. At a time when few recognized the potential of Janesville as a wayside for travelers, Natter understood it and figured out how to draw them with more than just a big cow.

“As dynamic as I saw he was in his later years, I’m sure he was as dynamic a guy as a younger man,” McGuire said.

“He was a little ahead of his time with the Oasis, and then time kind of passed him by. That happens. But he was a true, self-made man. He was a real entrepreneur in the bootstrap kind of way. I always admired that about him.”

Natter set up shop in a part of the city that was once farm fields on the northern edge of town. A few years later, the Milton Avenue corridor blossomed with retail, chain restaurants and other businesses.

For a while, the Oasis—where Natter ran a from-scratch, 24-hour eatery—was a low-cost destination for locals and travelers. Gazette archives show that in 1965, Natter and developers Jim Fitzgerald and Fred Weber made a huge splash with a man-made pond at the Oasis. It took more than half a month and 7 million gallons of city water to fill the pond.

In a 1983 interview with The Gazette, Natter chuckled remembering how the pond represented the largest order for city water in local history. And how right after the clay-lined pond was filled, all the water leaked out.

Before the 1,500-pound Bessie the Cow was fabricated and painted by Sculptured Advertising of Sparta, Natter leased another big, molded cow to stand at the Oasis.

That cow blew over in a windstorm, nearly crushing a car in the Oasis’ lot, Natter told The Gazette in a 2002 interview. Then came Bessie, at an initial cost of $6,000, according to Gazette reports.

In the mid-2000s, when Natter sold his Oasis properties to make way for the Menards and other developments, one investor was adamant that Bessie not be removed.

Local auto body shop operator Al Utzig never knew Natter, but in 2007 he made a deal with Bessie’s new owners to repair her and give her a new paint job—the same as her original white and brown coat.

Bessie was placed on a concrete, ersatz grassy knoll near the Arby’s—just a few hundred feet away from her former grazing spot, where a roundabout now guides traffic into Menards.

Utzig said it’s nice to see traveling families and children taking a break to pose for photos with the huge, horned Bessie. Janesville wouldn’t have become known as the town with the great big cow if Natter had not helped create the roadside phenomenon.

“He definitely was the one who put Bessie on the map,” Utzig said. “In a way, he put Janesville on the map.” 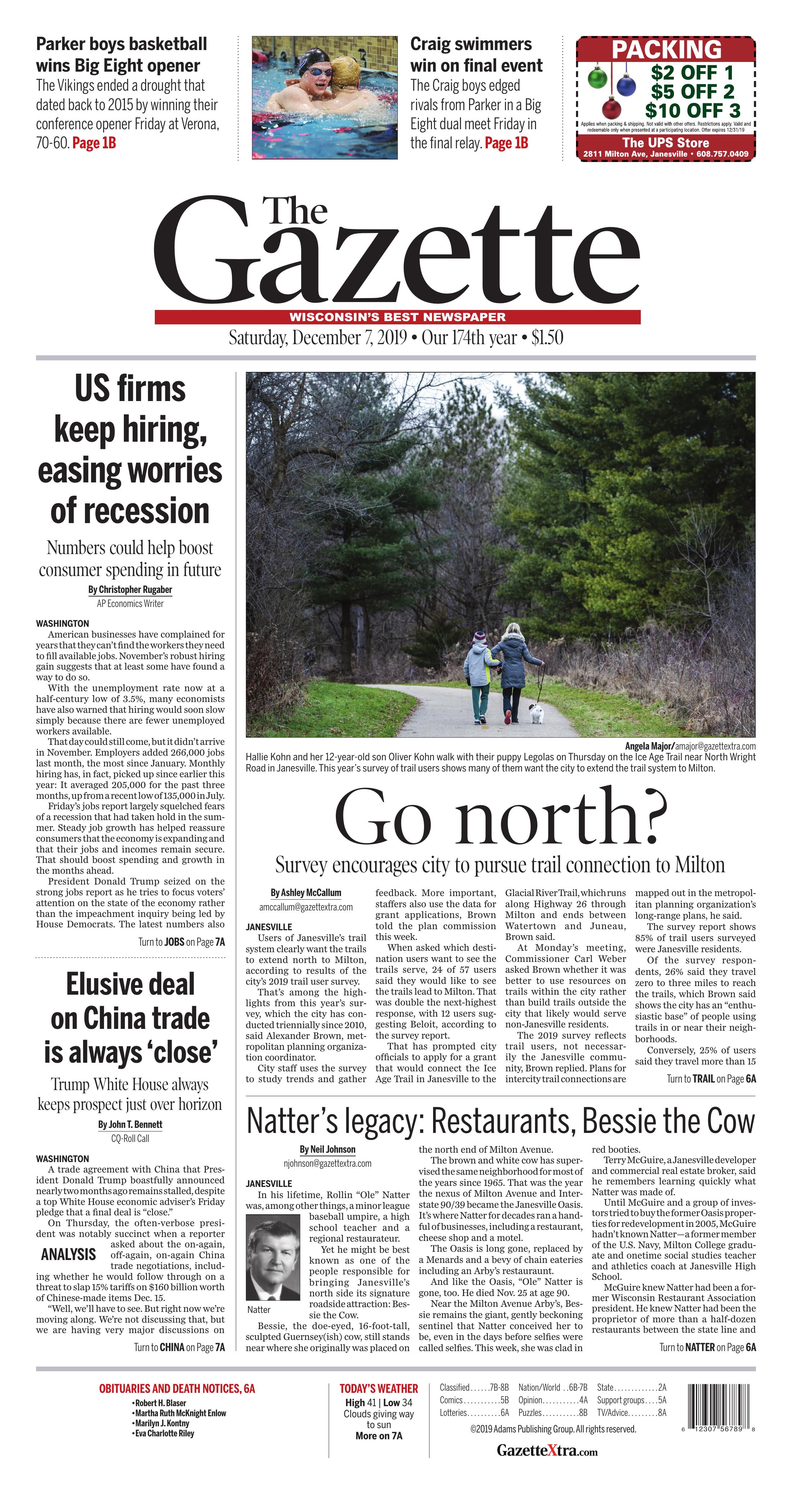