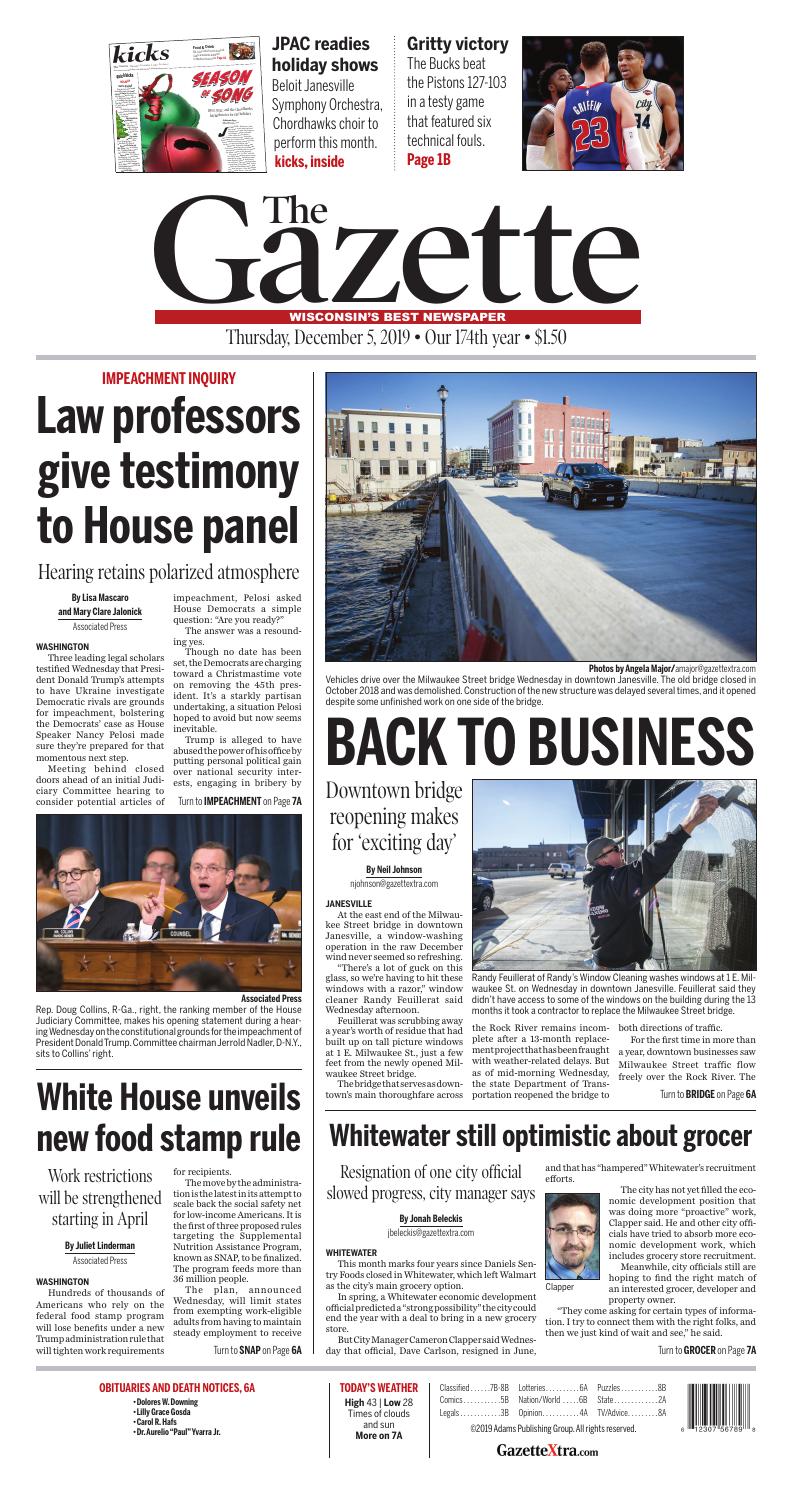 At the east end of the Milwaukee Street bridge in downtown Janesville, a window-washing operation in the raw December wind never seemed so refreshing.

“There’s a lot of guck on this glass, so we’re having to hit these windows with a razor,” window cleaner Randy Feuillerat said Wednesday afternoon.

Feuillerat was scrubbing away a year’s worth of residue that had built up on tall picture windows at 1 E. Milwaukee St., just a few feet from the newly opened Milwaukee Street bridge.

The bridge that serves as downtown’s main thoroughfare across the Rock River remains incomplete after a 13-month replacement project that has been fraught with weather-related delays. But as of mid-morning Wednesday, the state Department of Transportation reopened the bridge to both directions of traffic.

For the first time in more than a year, downtown businesses saw Milwaukee Street traffic flow freely over the Rock River. The bridge had been shut down for construction five months longer than the project’s contractor originally estimated. 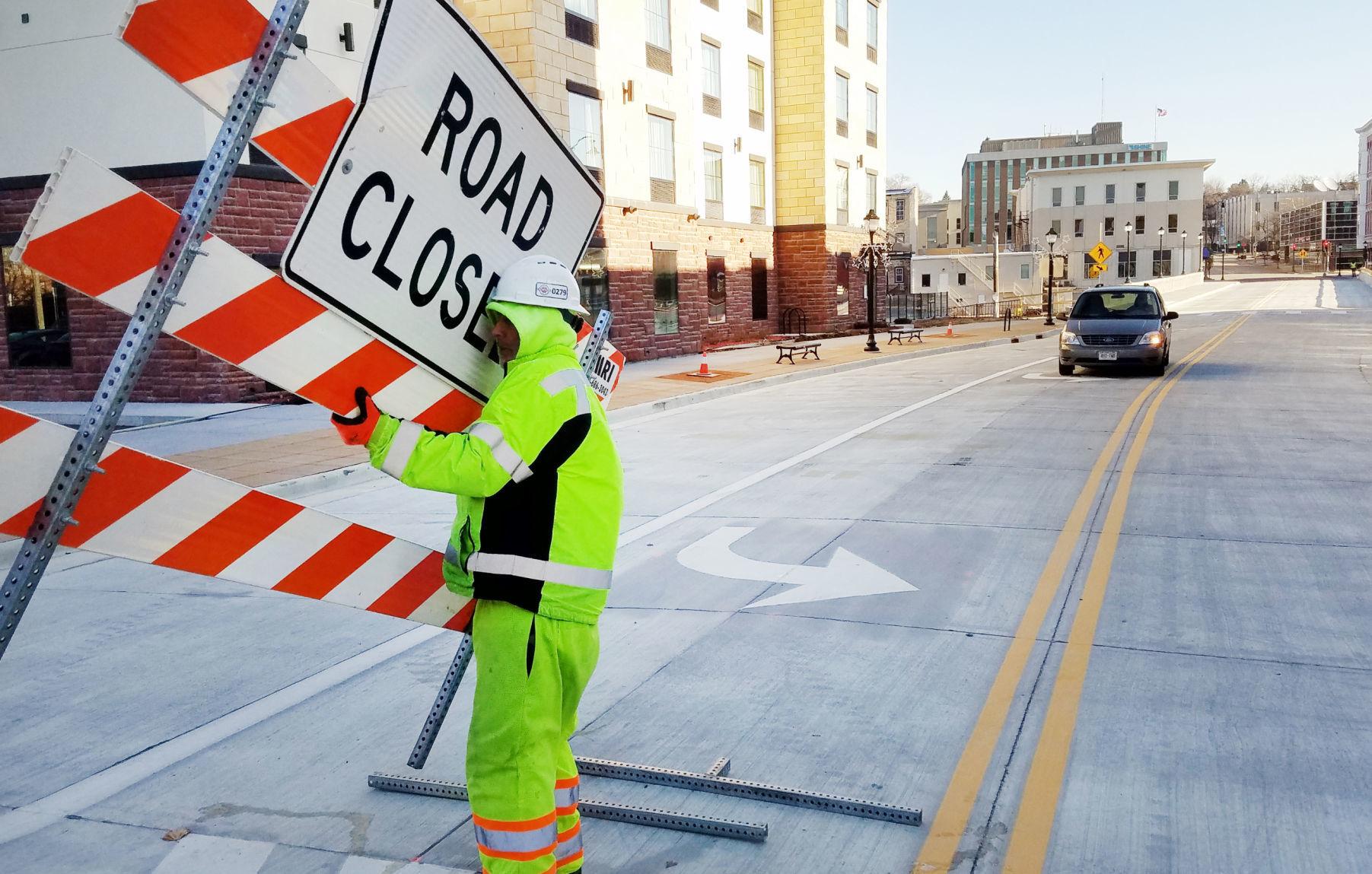 Mike MacLeod, of Mega Rentals in Madison, removes the final barrier from the Milwaukee Street bridge on Wednesday morning. The bridge reopened Wednesday after more than a year of construction and months of weather-related delays.

Feuillerat said his Beloit business, Randy’s Window Cleaning, normally washes most of the windows on the East Milwaukee Street office building every two weeks. Since October 2018, the Milwaukee Street bridge’s closure and construction made it impossible for him to access some of the office’s windows.

On Wednesday afternoon, Feuillerat had the windows clean enough that the glass showed reflections of cars passing on the bridge behind him. He spotted a turbocharged Nissan sports car making continuous hot laps across the bridge.

“I bet the guy drove that car back and forth over the bridge five or six times,” Feuillerat said. 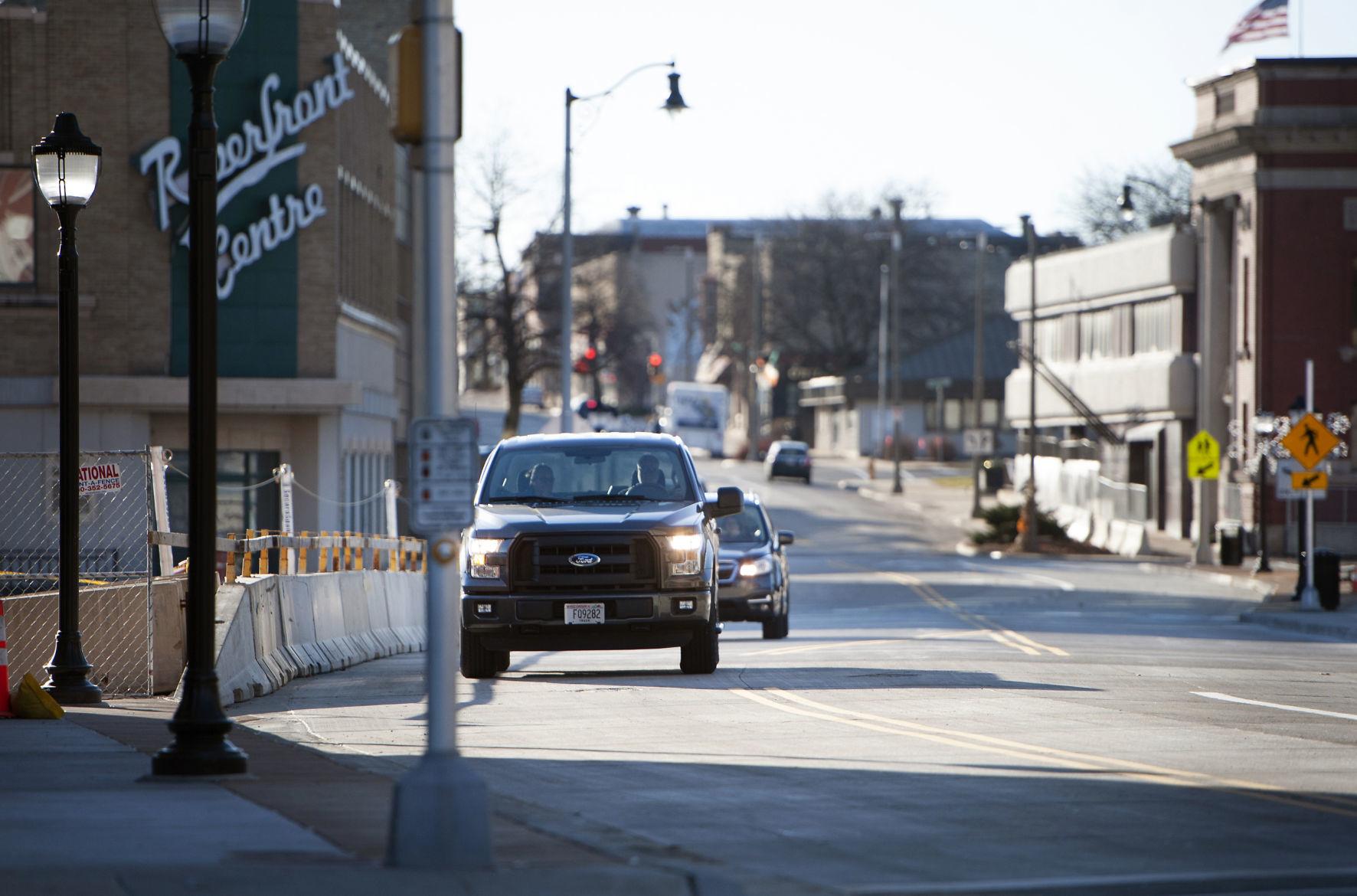 One of Reid’s employees drove her car across the bridge twice Wednesday to reassure herself she wasn’t dreaming or seeing a mirage.

“It’s been an exciting day. That’s what I’d call it,” Reid said.

Reid’s shop is one of several within a block of construction that included the bridge replacement, construction of a new hotel and street work that shut a side street, making it tough for customers to reach her shop or park anywhere near it. 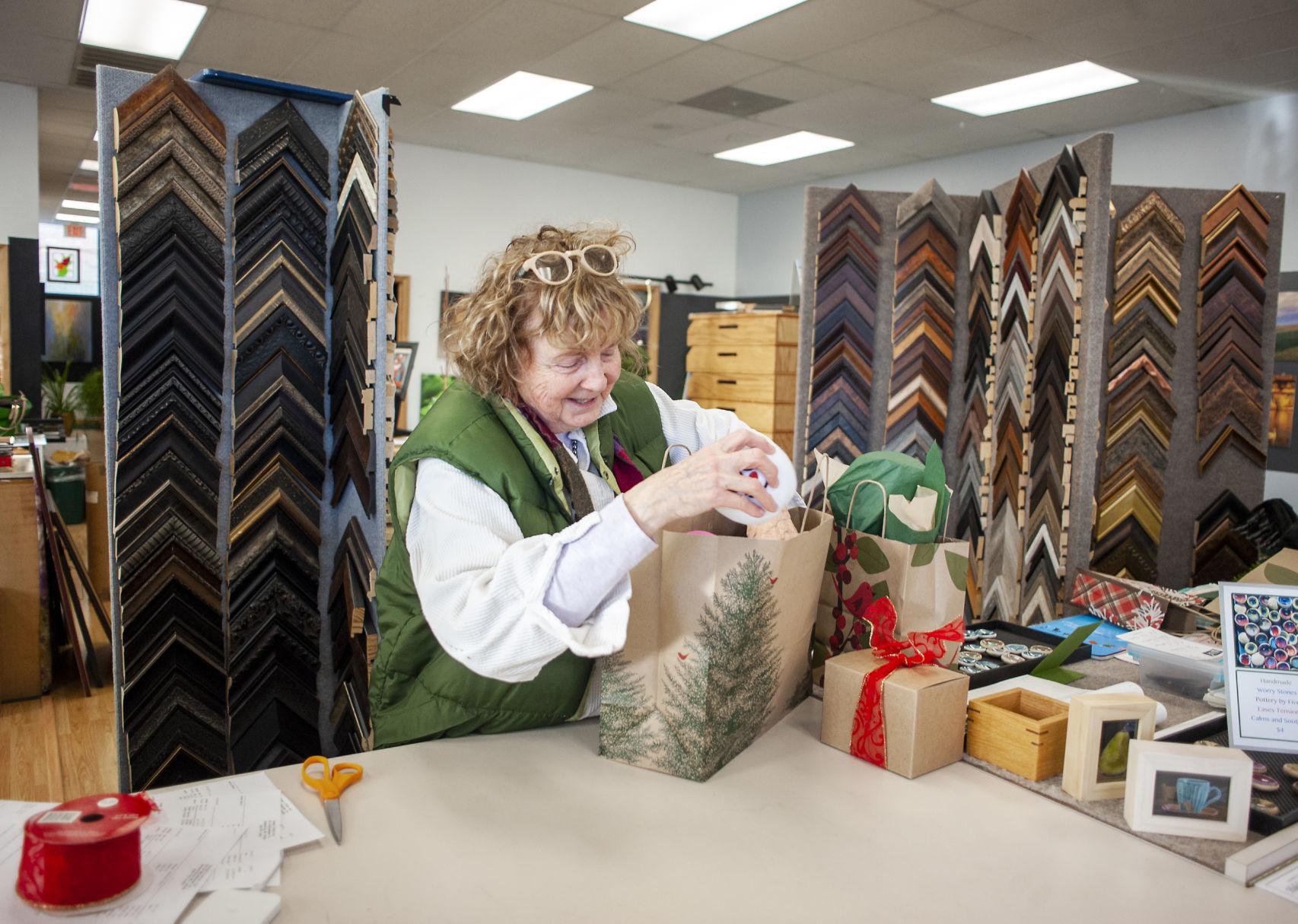 Employee Gail Pratt bags items for a customer Wednesday at Raven’s Wish on West Milwaukee Street in downtown Janesville. Raven’s Wish is one of dozens of businesses that weathered the Milwaukee Street Bridge’s closure for 13 months. Pratt was so excited the bridge was finally open that she drove her car across the new road twice Wednesday.

Reid fought through the monthslong closure by staying involved in special downtown shopping events. She mailed hand-written cards to repeat customers to thank them for their loyalty and ask them to continue shopping at Raven’s Wish despite the protracted bridge project that had forced customers to drive or walk blocks out of their way to reach the shop.

Reid said it has been heartening to see several new shops open this summer and autumn along West Milwaukee Street, including the new Cobblestone Hotel, a cheesecake shop and a clothing boutique. But she said it has been equally painful to watch those brand new businesses try to get a foothold amid a bridge shutdown that had detoured traffic blocks to the north and south of their storefronts.

Zenith Tech, the bridge project’s contractor, and the state Department of Transportation, have said the project fell about five months behind mostly because of high water on the Rock River.

Zenith Tech had faced weeks of penalty charges from the DOT for the project’s overrun. The DOT and Zenith Tech felt growing pressure from the city to reopen at least one lane of traffic over the bridge, even though the state said it was likely that finishing work along the bridge’s south wall might not be completed until spring 2020.

The DOT announced this week it would open the bridge to traffic both directions, although a DOT spokesperson said the eastbound lane could be shut down later this winter if river levels fall and Zenith Tech is able to get back to work on the south side.

Along West Milwaukee Street, three local women were embracing after they wrapped up the first lunch date they had with each other downtown in more than a year.

They ate at the Cozy Inn, a long-running Chinese restaurant in an upper-floor suite along West Milwaukee Street.

One of the women, Renae Henry, a Janesville native and a local real estate agent, said she had been hopping from one West Milwaukee Street business to the next. 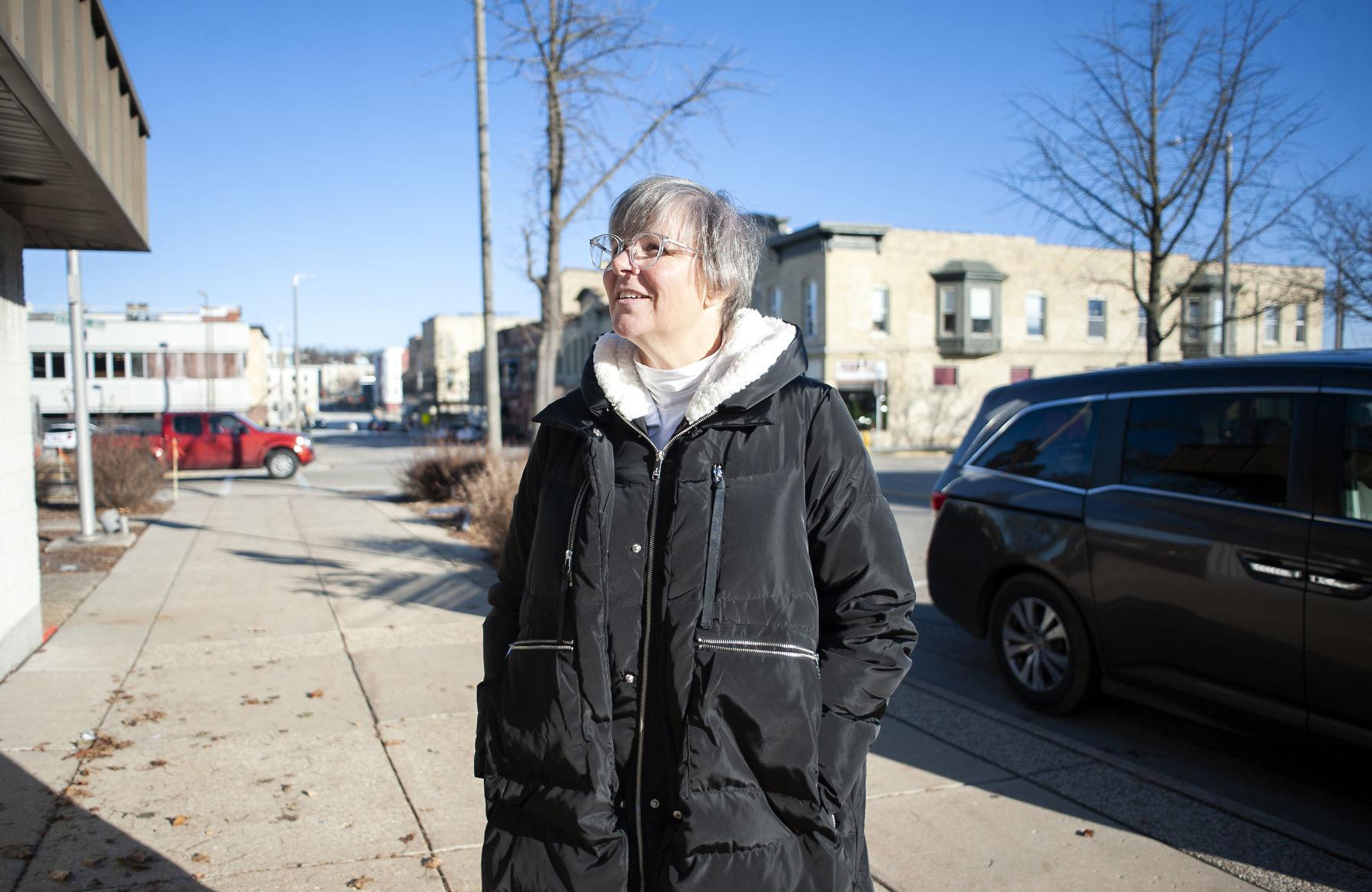 Renae Henry talks with a Gazette reporter about the Milwaukee Street bridge opening Wednesday in downtown Janesville. Henry and a few friends had a lunch and shopped downtown.

“The bridge opening up today was exciting to see. I could feel it spark some spontaneity,” Henry said.

Henry said she’d had a pricey piece of art framed at a shop on West Milwaukee Street, but she’d avoided picking it up for months because she had a hard time parking anywhere near the shop amid the mess of bridge construction.

Reid said she was starting to wonder whether she would have to launch another expensive marketing campaign to pull her shop through yet another holiday shopping season with the bridge closed for construction. Then she got an email from the DOT on Tuesday notifying her the bridge would reopen Wednesday.

Reid didn’t want to get her hopes up. But in the late morning, once she saw streams of cars moving westward along the street, she went out to look at the bridge. Indeed, it was open.

“I’ve been smiling all day.”

It’s true. After closure for more than a year, the Milwaukee Street bridge in downtown Janesville will open Wednesday to one lane in each direction.

In spring, a Whitewater economic development official predicted a “strong possibility” the city could end the year with a deal to bring in a new grocery store.

Meanwhile, city officials still are hoping to find the right match of an interested grocer, developer and property owner.

“They come asking for certain types of information. I try to connect them with the right folks, and then we just kind of wait and see,” he said.

The city also pursues development opportunities and pitches Whitewater as a location for them, he said.

Clapper said the city’s prospects are as good as they were earlier in the year, and two or three other leads have come up.

“The same players are there,” he said. “It’s just we haven’t been able to get to a point where we’ve got somebody putting (a) shovel in the ground or occupying a space.”

Clapper pointed to another news outlet’s recent coverage, which he said incorrectly implied Toppers Pizza could leave its headquarters and open a space that might interest a grocer.

The city manager emphasized he has no reason to think the pizza chain will do anything but stay where it is.

In the four years since Sentry closed, Clapper said, the city has been working to build and maintain relationships with potential grocers and wholesalers.

“It’s about finding the right fit,” he said.

The demographics in the city that has seen an expanding university aren’t the same as they were 60 or even 30 years ago when the city had several smaller grocery stores. But he said a new subdivision and opportunities for single-family home development should add to the city’s marketability.

The interest Clapper has seen other parties express in coming to or developing in Whitewater leaves him believing a grocery store will come to the city. But as the economic development staffing situation shows, sometimes there are bumps in the road.

“I’m optimistic that we’ll have a grocer, a grocery development in the near future,” he said. “I’m not going to put a date on it because things happen.” 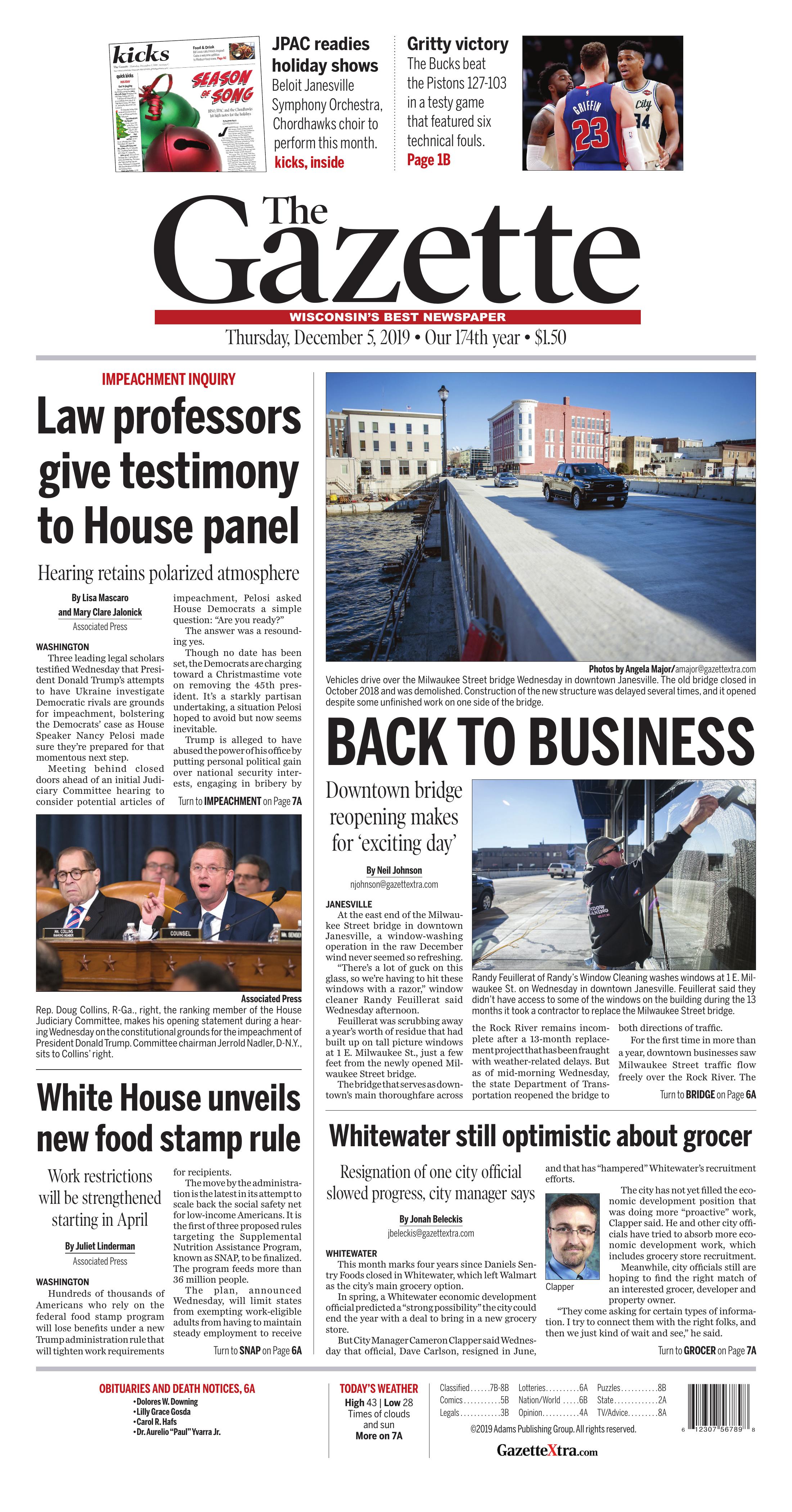