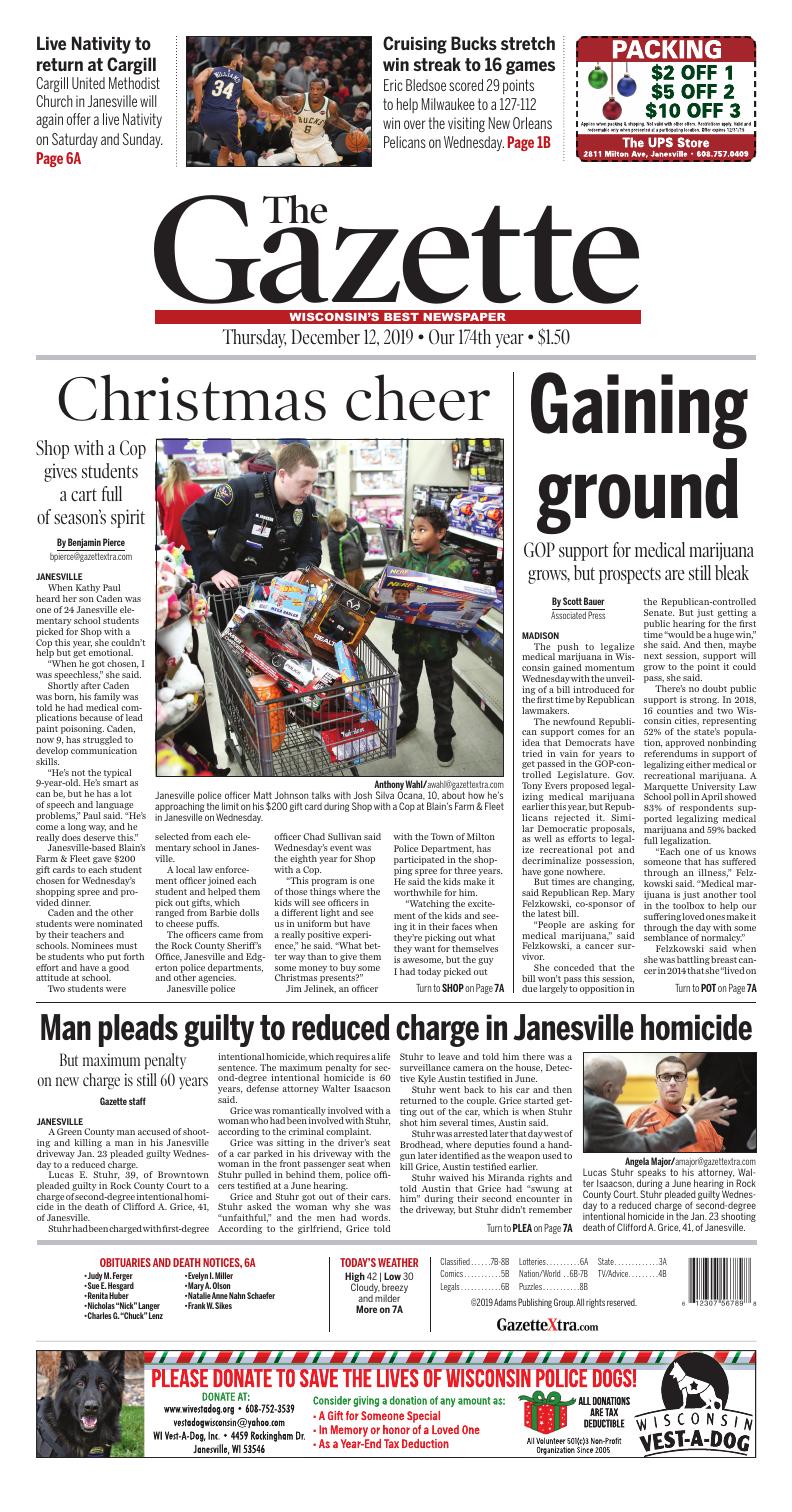 Kasiah Babler places her gifts on the checkout conveyor belt during Shop with a Cop at Blain’s Farm & Fleet in Janesville on Wednesday. Officers from several agencies helped students shop for Christmas presents at Farm & Fleet, which donated a $200 gift card to each student.

When Kathy Paul heard her son Caden was one of 24 Janesville elementary school students picked for Shop with a Cop this year, she couldn’t help but get emotional.

“When he got chosen, I was speechless,” she said.

Shortly after Caden was born, his family was told he had medical complications because of lead paint poisoning. Caden, now 9, has struggled to develop communication skills.

“He’s not the typical 9-year-old. He’s smart as can be, but he has a lot of speech and language problems,” Paul said. “He’s come a long way, and he really does deserve this.” 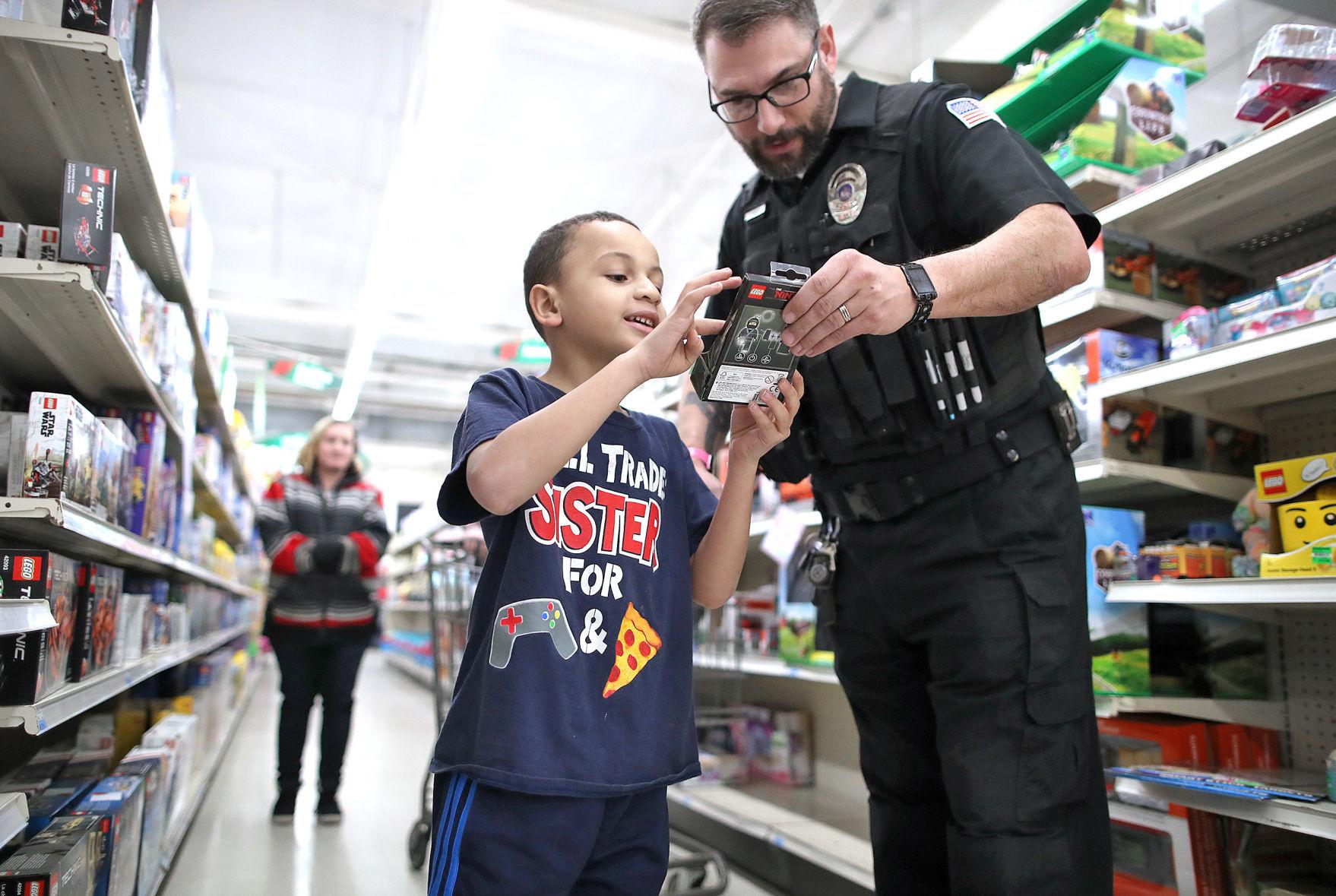 Edgerton police officer Brody Kapellen looks at a small Lego toy with Jadin Govan, 6, while searching for presents to buy during Shop with a Cop at Blain’s Farm & Fleet in Janesville on Wednesday.

Caden and the other students were nominated by their teachers and schools. Nominees must be students who put forth effort and have a good attitude at school.

Two students were selected from each elementary school in Janesville.

A local law enforcement officer joined each student and helped them pick out gifts, which ranged from Barbie dolls to cheese puffs.

The officers came from the Rock County Sheriff’s Office, Janesville and Edgerton police departments, and other agencies. 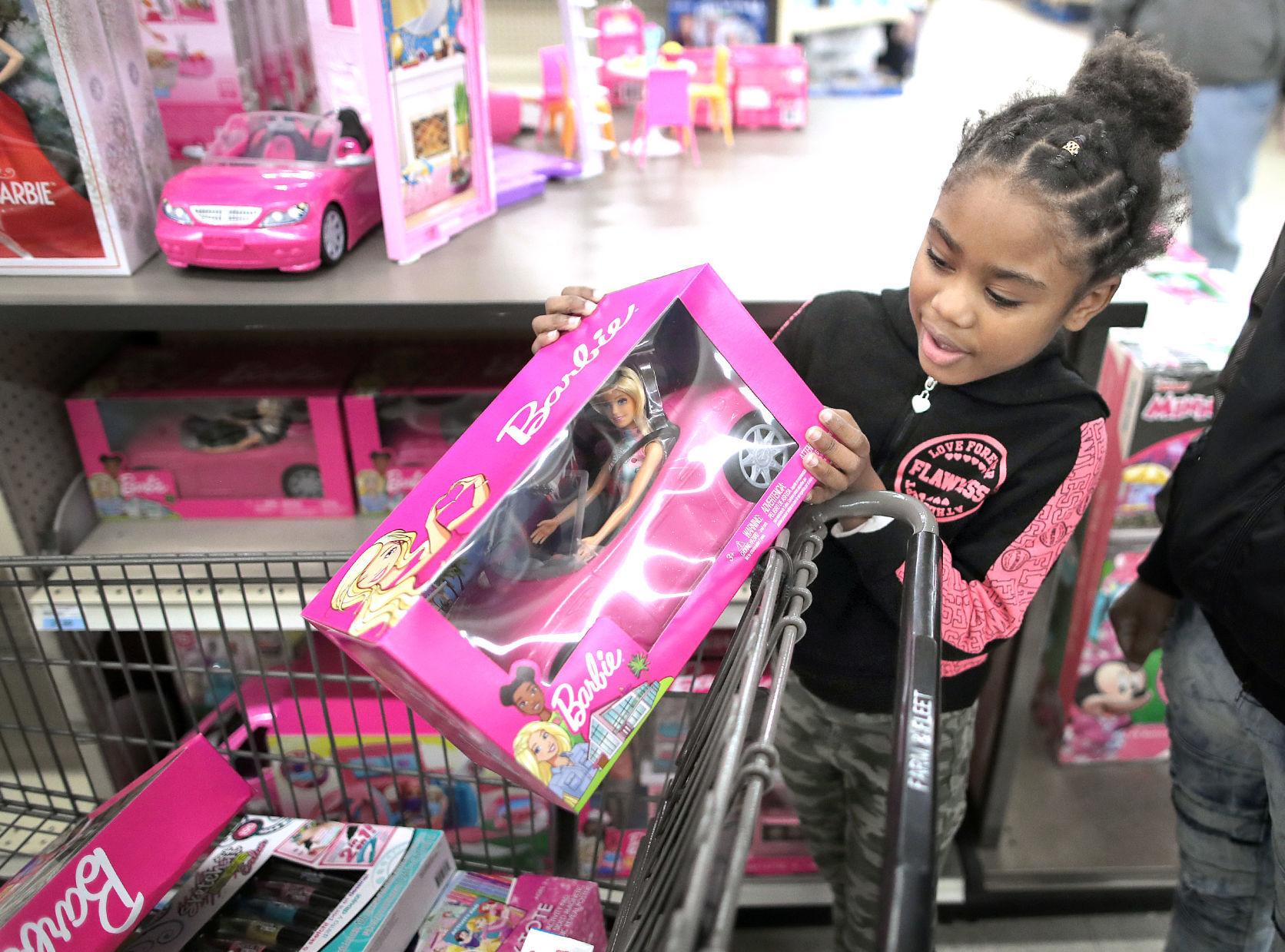 Nyarria Chatfield, 8, places a Barbie into her shopping cart during the annual Shop with a Cop event at Blain’s Farm & Fleet in Janesville on Wednesday. Officers from several departments helped 24 Janesville students shop for Christmas presents at the store.

“This program is one of those things where the kids will see officers in a different light and see us in uniform but have a really positive experience,” he said. “What better way than to give them some money to buy some Christmas presents?”

Jim Jelinek, an officer with the Town of Milton Police Department, has participated in the shopping spree for three years. He said the kids make it worthwhile for him.

“Watching the excitement of the kids and seeing it in their faces when they’re picking out what they want for themselves is awesome, but the guy I had today picked out something for his brothers and sisters first,” he said.

“It’s a joy to see their faces light up and being able to do this with them.”

Sullivan said the event helps both the students and officers have a good Christmas.

“It makes the holidays a lot better,” he said. 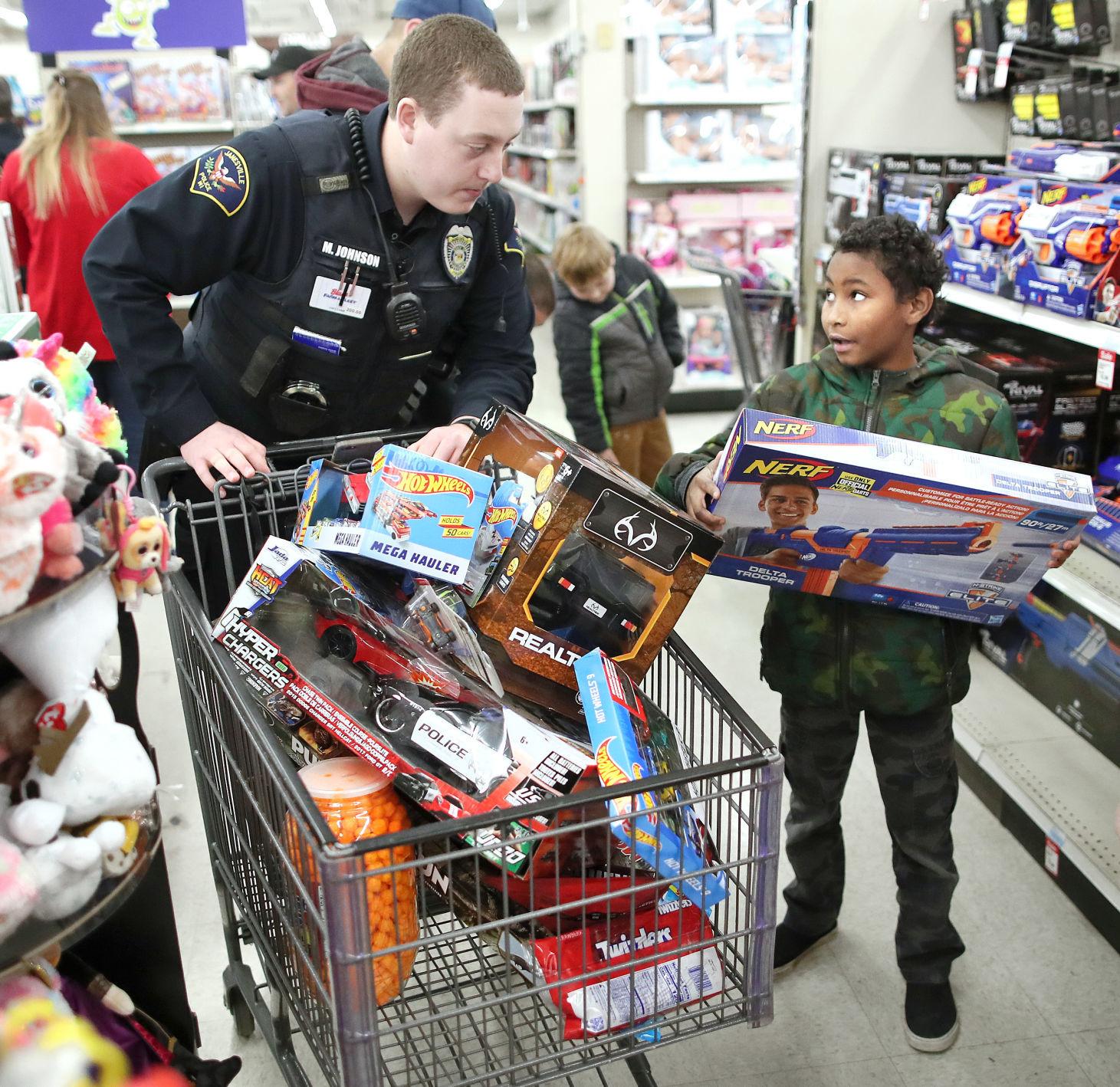 Janesville police officer Matt Johnson talks with Josh Silva Ocana, 10, about how he’s approaching the limit on his $200 gift card during Shop with a Cop at Blain’s Farm & Fleet in Janesville on Wednesday.

Noah Pace, 10, who attends Madison Elementary School, said his favorite part of Shop with a Cop was getting to spend $200.

Pace, who was paired with Rock County Sheriff Troy Knudson, bought collectibles, games and clothes. His total came to $200.49. Lucky for him, Knudson spotted him 50 cents so he could pay the cashier.

Pace said the sheriff did a good job helping him pick out his gifts.

“It’s going to be a good Christmas.” 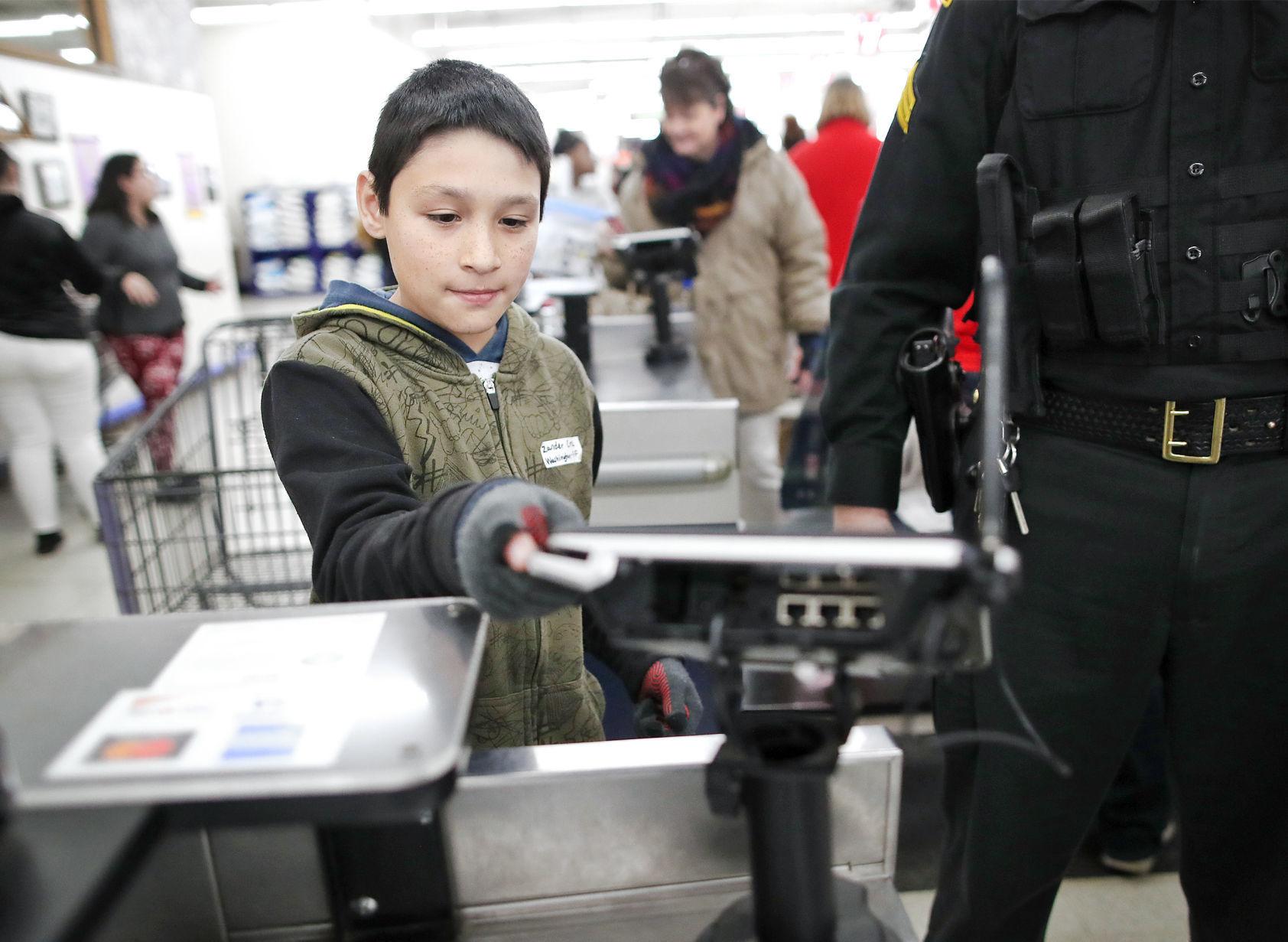 Zander Cruz, 10, slides his $200 gift card to pay for the toys and gifts he chose at Shop with a Cop on Wednesday at Blain’s Farm & Fleet in Janesville.

Lucas Stuhr speaks to his attorney, Walter Isaacson, during a June hearing in Rock County Court. Stuhr pleaded guilty Wednesday to a reduced charge of second-degree intentional homicide in the Jan. 23 shooting death of Clifford A. Grice, 41, of Janesville.

A Green County man accused of shooting and killing a man in his Janesville driveway Jan. 23 pleaded guilty Wednesday to a reduced charge.

Lucas E. Stuhr, 39, of Browntown pleaded guilty in Rock County Court to a charge of second-degree intentional homicide in the death of Clifford A. Grice, 41, of Janesville.

Grice was sitting in the driver’s seat of a car parked in his driveway with the woman in the front passenger seat when Stuhr pulled in behind them, police officers testified at a June hearing.

Grice and Stuhr got out of their cars. Stuhr asked the woman why she was “unfaithful,” and the men had words. According to the girlfriend, Grice told Stuhr to leave and told him there was a surveillance camera on the house, Detective Kyle Austin testified in June.

Stuhr went back to his car and then returned to the couple. Grice started getting out of the car, which is when Stuhr shot him several times, Austin said.

Stuhr was arrested later that day west of Brodhead, where deputies found a handgun later identified as the weapon used to kill Grice, Austin testified earlier.

Stuhr waived his Miranda rights and told Austin that Grice had “swung at him” during their second encounter in the driveway, but Stuhr didn’t remember what happened after that.

Video from the security camera on Grice’s home did not show Grice swinging or acting in a threatening manner, Austin testified in June.

A defendant who pleads guilty to second-degree intentional homicide admits imperfect self-defense—using too much force for the circumstances. For example, a defendant might wrongly think that shooting another person is necessary to prevent death or great bodily harm to himself or another person.

When asked by The Gazette why Stuhr believed he was acting in self-defense, Isaacson did not provide a clear explanation.

“There was a female involved, and the guy who got killed was going out with his significant other. I don’t think it would be fair to say it was just a fight over a girl, it was just that involved,” Isaacson said.

“He didn’t go to the victim’s house, he was just following her, he just saw her inadvertently in town. He followed her car, which went to Mr. Grice’s residence, and that’s where the shooting occurred,” Isaacson said.

“Any time you think that you’re being threatened and you overreact, that’s what’s imperfect about it,” Isaacson said.

Stuhr is scheduled to be sentenced April 17. 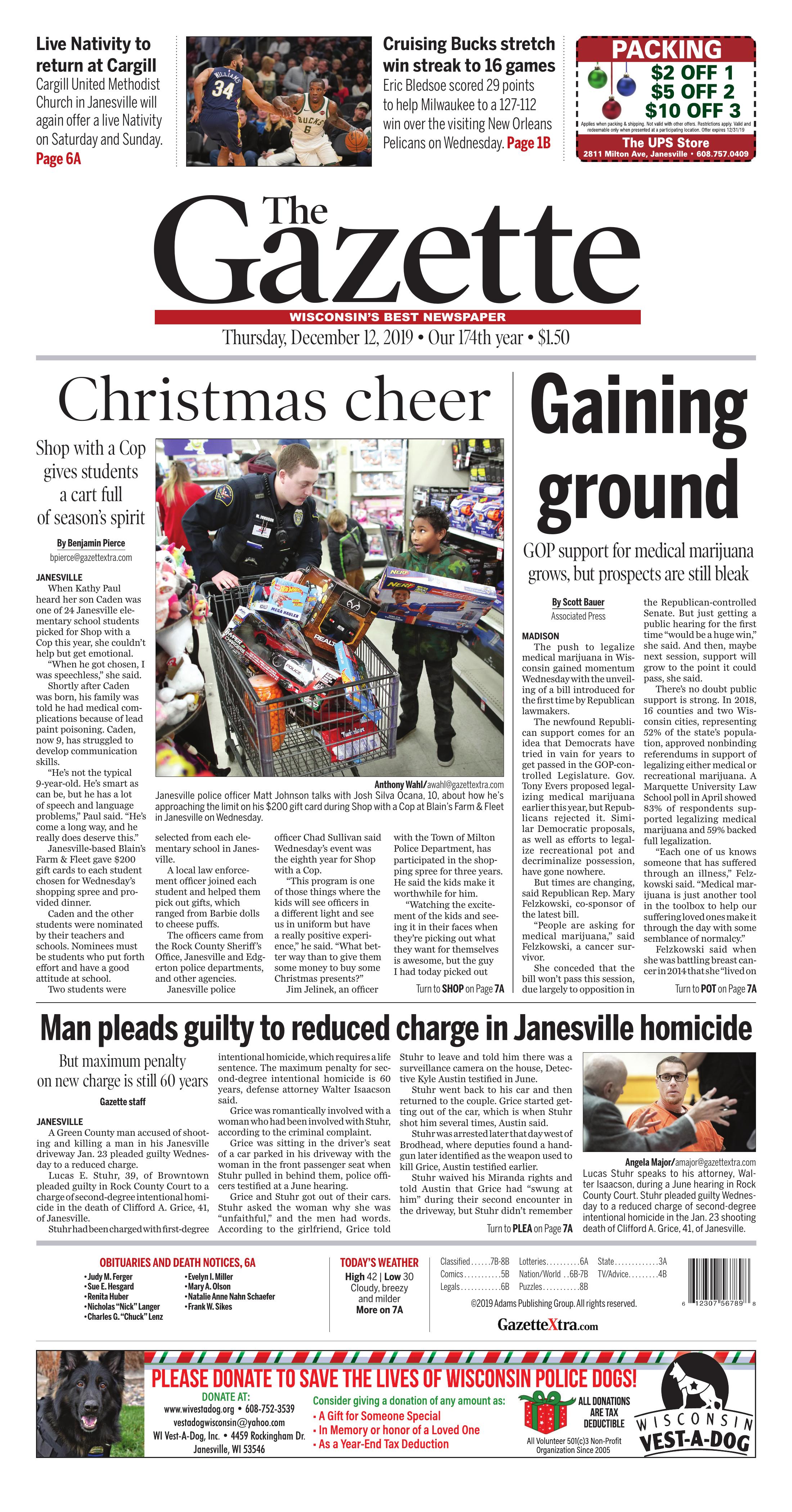