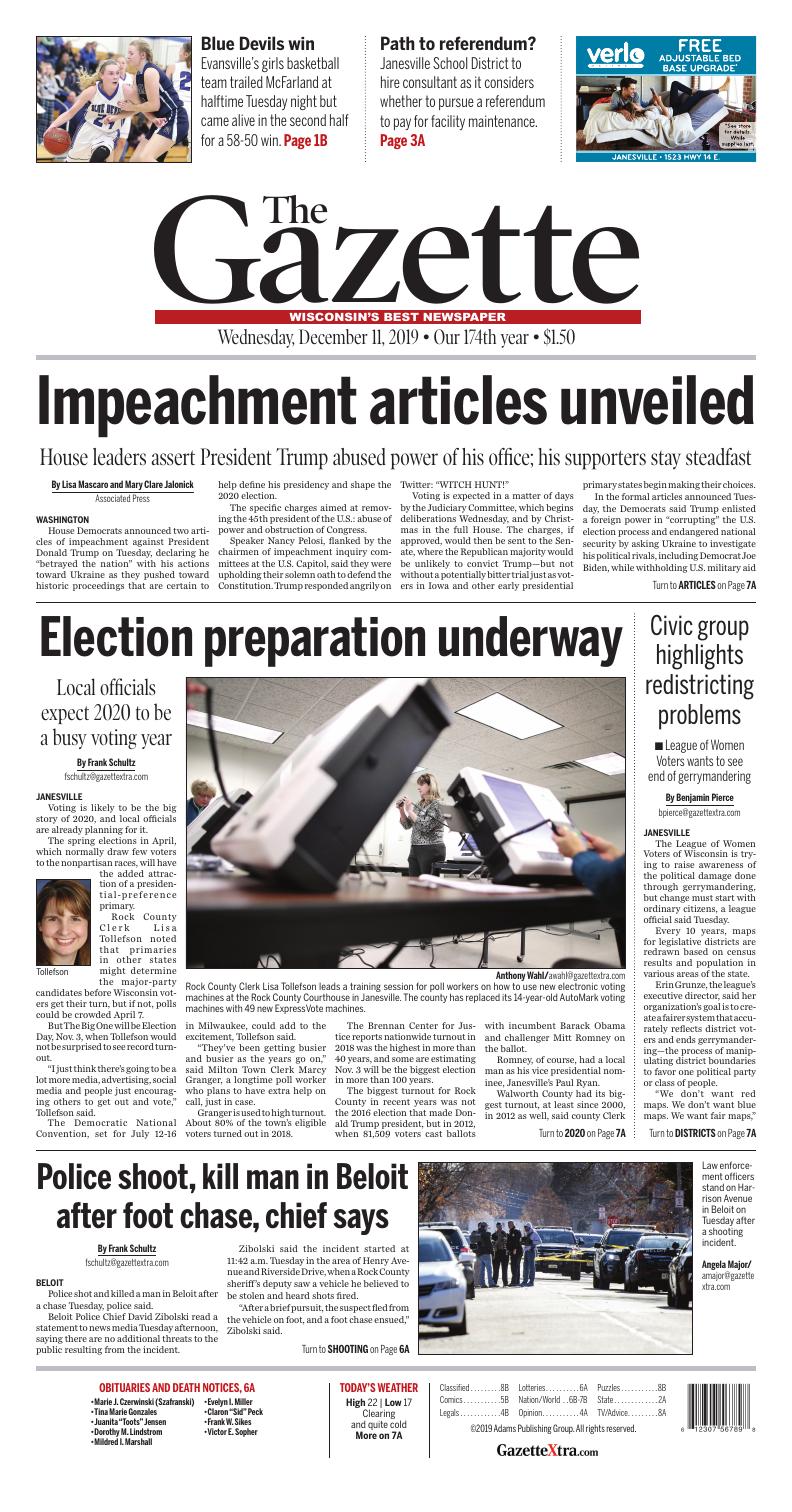 Government
top story
2020 could be 'The Big One' for voting
fschultz  / By Frank Schultz fschultz@gazettextra.com
12.11.19
Anthony Wahl

Poll workers learn how to operate new voting machines during a training session at the Rock County Courthouse in Janesville.

Voting is likely to be the big story of 2020, and local officials are already planning for it.

The spring elections in April, which normally draw few voters to the nonpartisan races, will have the added attraction of a presidential-preference primary.

Rock County Clerk Lisa Tollefson noted that primaries in other states might determine the major-party candidates before Wisconsin voters get their turn, but if not, polls could be crowded April 7. 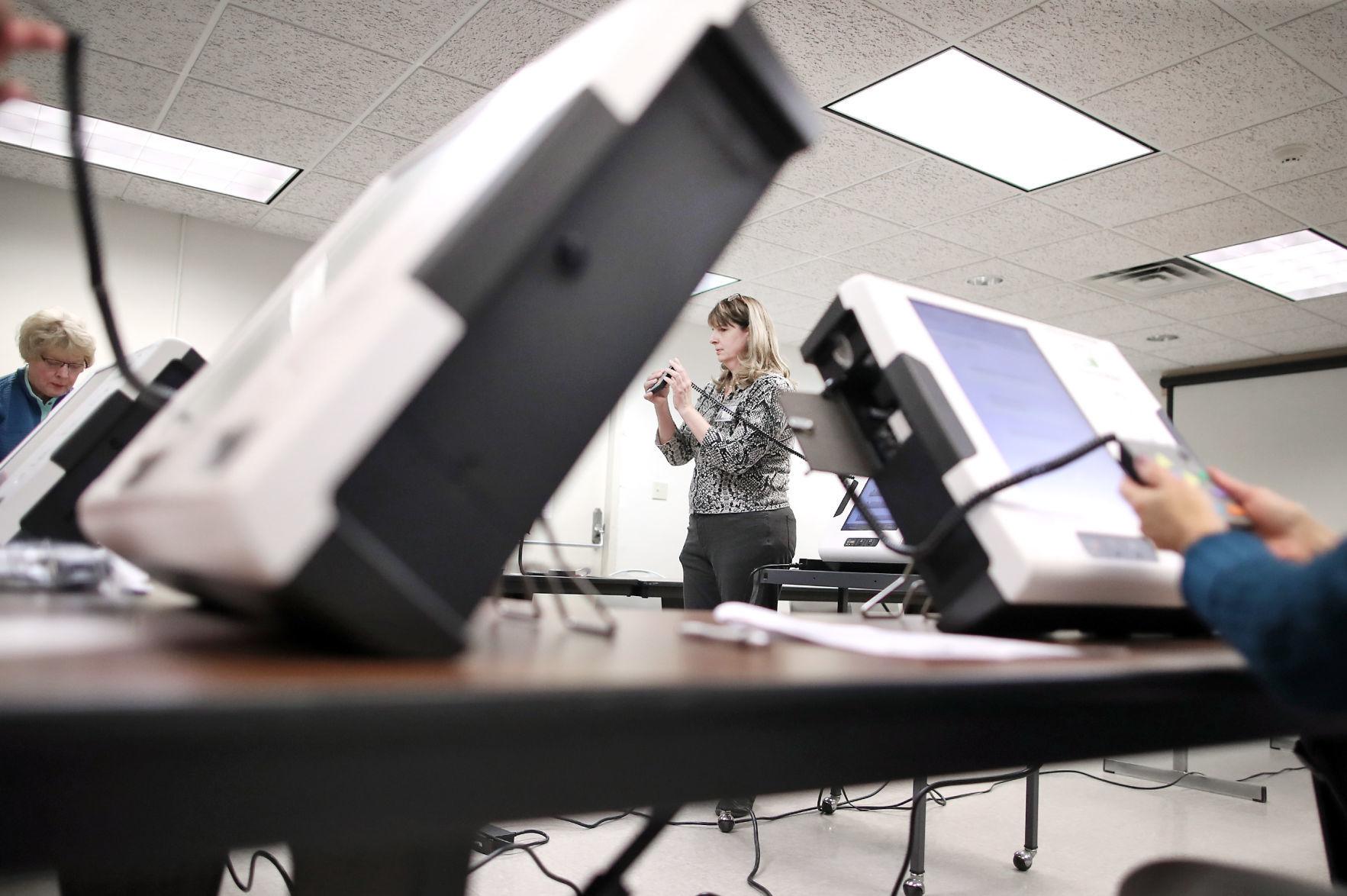 Rock County Clerk Lisa Tollefson leads a training session for poll workers on how to use new electronic voting machines at the Rock County Courthouse in Janesville. The county has replaced its 14-year-old AutoMark voting machines with 49 new ExpressVote machines.

But The Big One will be Election Day, Nov. 3, when Tollefson would not be surprised to see record turnout.

“I just think there’s going to be a lot more media, advertising, social media and people just encouraging others to get out and vote,” Tollefson said.

The Democratic National Convention, set for July 12-16 in Milwaukee, could add to the excitement, Tollefson said.

“They’ve been getting busier and busier as the years go on,” said Milton Town Clerk Marcy Granger, a longtime poll worker who plans to have extra help on call, just in case.

Granger is used to high turnout. About 80% of the town’s eligible voters turned out in 2018.

The Brennan Center for Justice reports nationwide turnout in 2018 was the highest in more than 40 years, and some are estimating Nov. 3 will be the biggest election in more than 100 years. 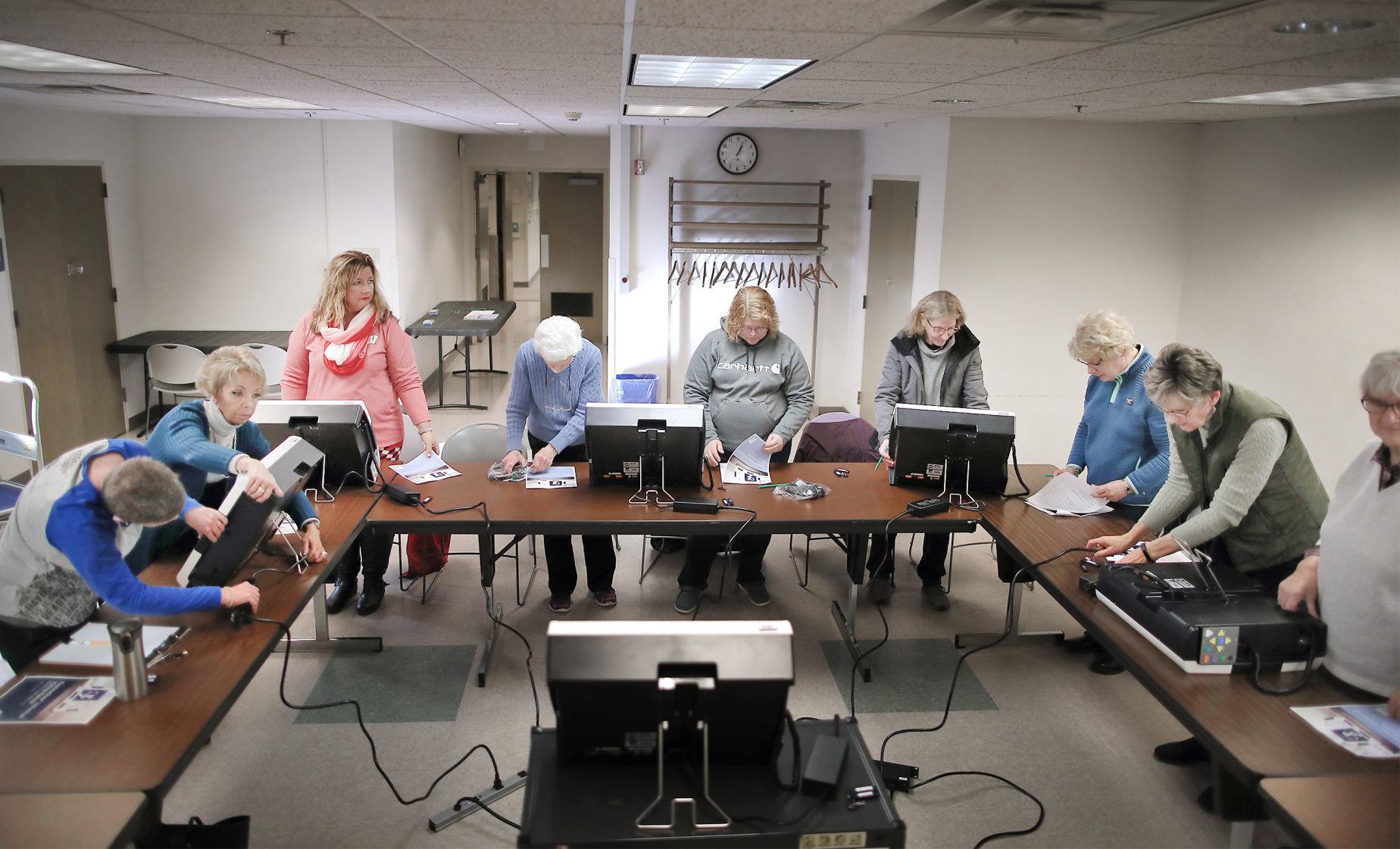 Poll workers learn how to turn on their electronic voting machines during a recent hands-on training session at the Rock County Courthouse in Janesville.

The biggest turnout for Rock County in recent years was not the 2016 election that made Donald Trump president, but in 2012, when 81,509 voters cast ballots with incumbent Barack Obama and challenger Mitt Romney on the ballot.

Romney, of course, had a local man as his vice presidential nominee, Janesville’s Paul Ryan.

Walworth County had its biggest turnout, at least since 2000, in 2012 as well, said county Clerk Kim Bushey.

“I think we’re going to have a really good turnout this year, both in April and November,” Bushey said.

Tollefson said most town, village and city clerks will hire more poll workers in anticipation of a big November turnout, and they’ll likely split their poll books, which contain the names of registered voters, so they can have multiple lines of people waiting to get ballots.

Janesville Clerk-Treasurer Dave Godek said he will be looking for high school students to add to the poll worker ranks next year.

“It gives us extra people to help, and they do a wonderful job with that,” he said.

Godek has a list of 250 people for the city council to approve to work at the polls, but he said he welcomes more. 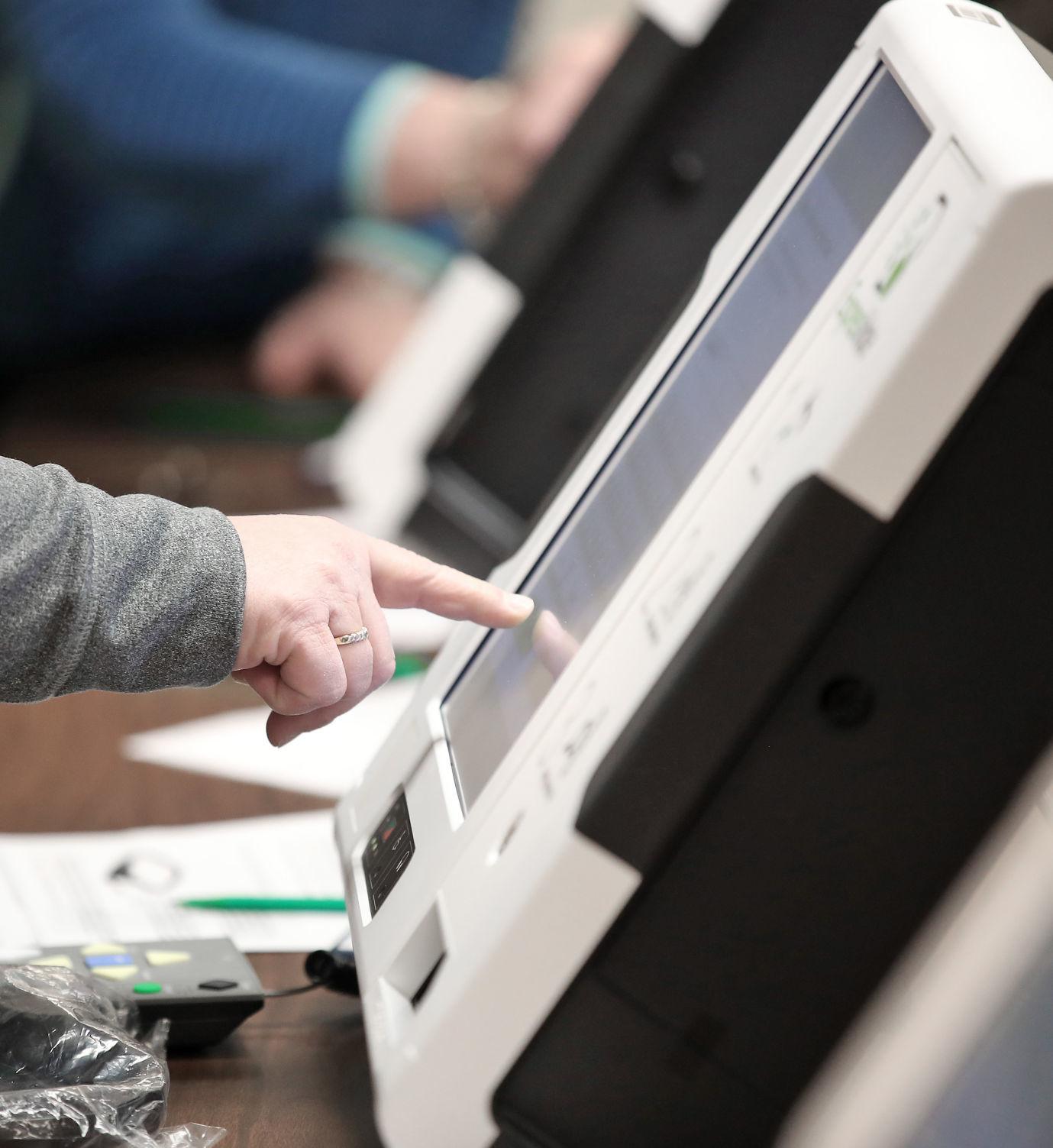 A trainee runs through a simulated election to understand the features of Rock County’s new voting machines.

Godek hasn’t seen major problems with the state’s photo ID requirement for voters, but it happens.

“The earlier people get in touch with me, the easier it is for me to help them,” he said. “I want to help people to vote, but it’s really hard to help them when they come to us on Election Day at 4 o’clock in the afternoon.”

Early voting will also continue its recent expansion, which could relieve pressure at the polls, clerks said.

Godek said the biggest problem with voter registration on Election Day is people who didn’t realize they had to update their registrations after moving.

Luckily for them, Wisconsin offers same-day registration. Still, voting is easier for those who take care of that ahead of time.

Tollefson said officials statewide are readying plans to combat voter misinformation. Past attempts around the country included mailings that misled people about how to vote.

“There are going to be a lot of people trying to get false information out there, so be diligent about where you get your information,” she said.

To check voter-registration status and get answers to most 2020 election questions, go online to myvote.wi.gov or call your municipal clerk.

A person with the Beloit Police Department strings police tape on Harrison Avenue on Tuesday after a shooting.

Law enforcement officers stand on Harrison Avenue on Tuesday after a shooting in Beloit.

Harrison Avenue is blocked off at Bayliss Avenue on Tuesday in Beloit.

A member of the Beloit Police Department sets up police tape Tuesday to block off part of Harrison Avenue in Beloit.

Police shot and killed a man in Beloit after a chase Tuesday, police said.

Beloit Police Chief David Zibolski read a statement to news media Tuesday afternoon, saying there are no additional threats to the public resulting from the incident.

Zibolski said the incident started at 11:42 a.m. Tuesday in the area of Henry Avenue and Riverside Drive, when a Rock County sheriff’s deputy saw a vehicle he believed to be stolen and heard shots fired.

“After a brief pursuit, the suspect fled from the vehicle on foot, and a foot chase ensued,” Zibolski said. 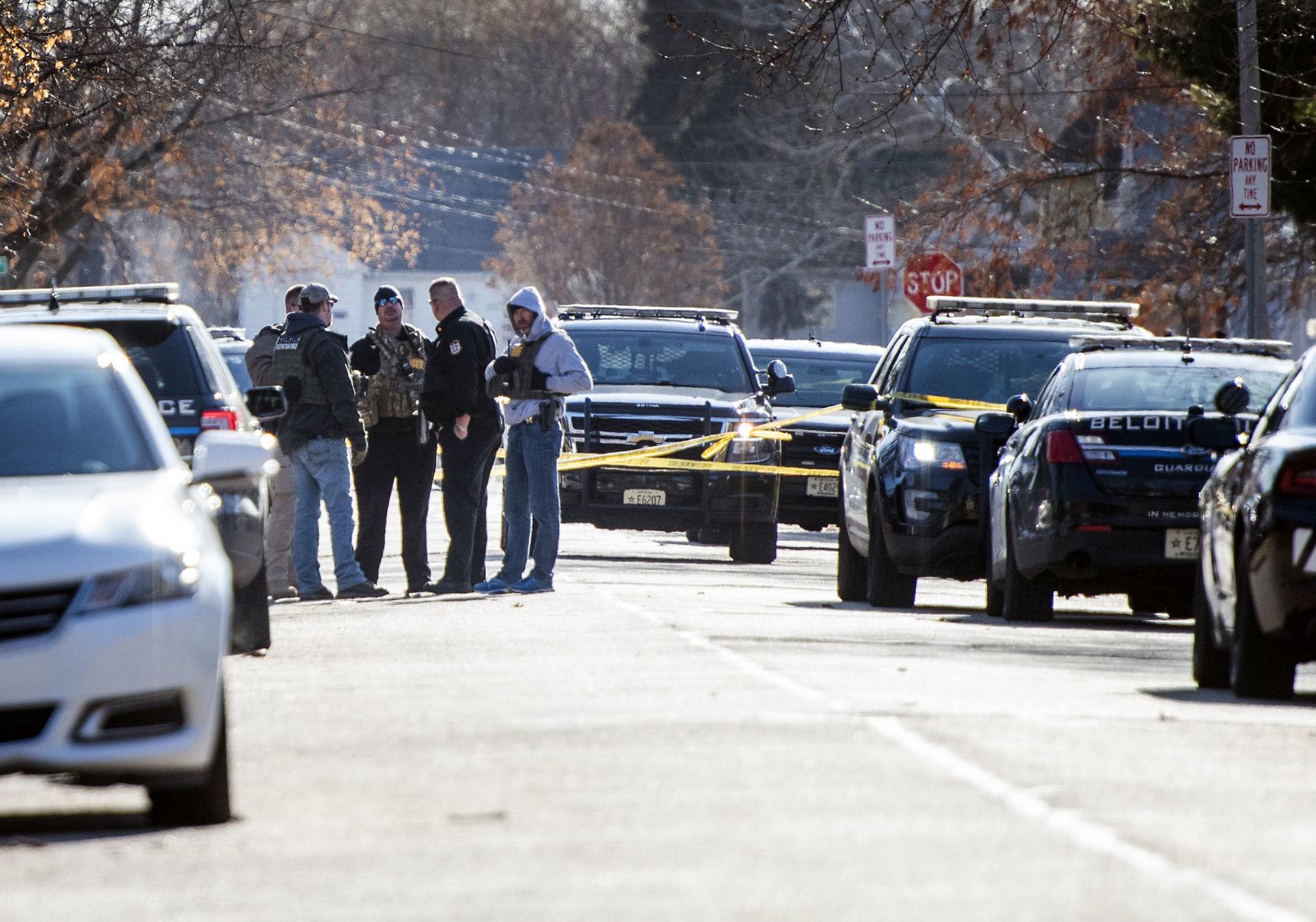 Law enforcement officers stand on Harrison Avenue on Tuesday in Beloit after a shooting incident.

Beloit police responded to assist, and the suspect was located a few minutes later in the 1800 block of Harrison Avenue “where he was observed to be armed,” Zibolski said.

“Three Beloit officers fired at the suspect, who received fatal injuries. The suspect was pronounced deceased at 12:25 p.m.,” Zibolski said.

No law enforcement officers were injured, and police would not release the names of the suspect or the officers, Zibolski said.

The Beloit School District placed three schools—Merrill, Aldrich and Robinson—on soft lockdown during the incident. During a soft lockdown, school continues as normal but nobody is allowed in or out of the building.

Zibolski referred all questions to the Division of Criminal Investigation, which typically releases little or no information until its investigation is complete.

The Beloit Daily News reported the last shooting involving Beloit police officers was in downtown Beloit on June 11, 2013. Darrius Lowery-Baptiste was shot and killed by police when officers attempted to block the car he was driving on Grand Avenue near State Street. He reportedly tried to drive around one of the cars blocking him and nearly hit an officer. Officers fired their weapons at that time, causing fatal injuries. 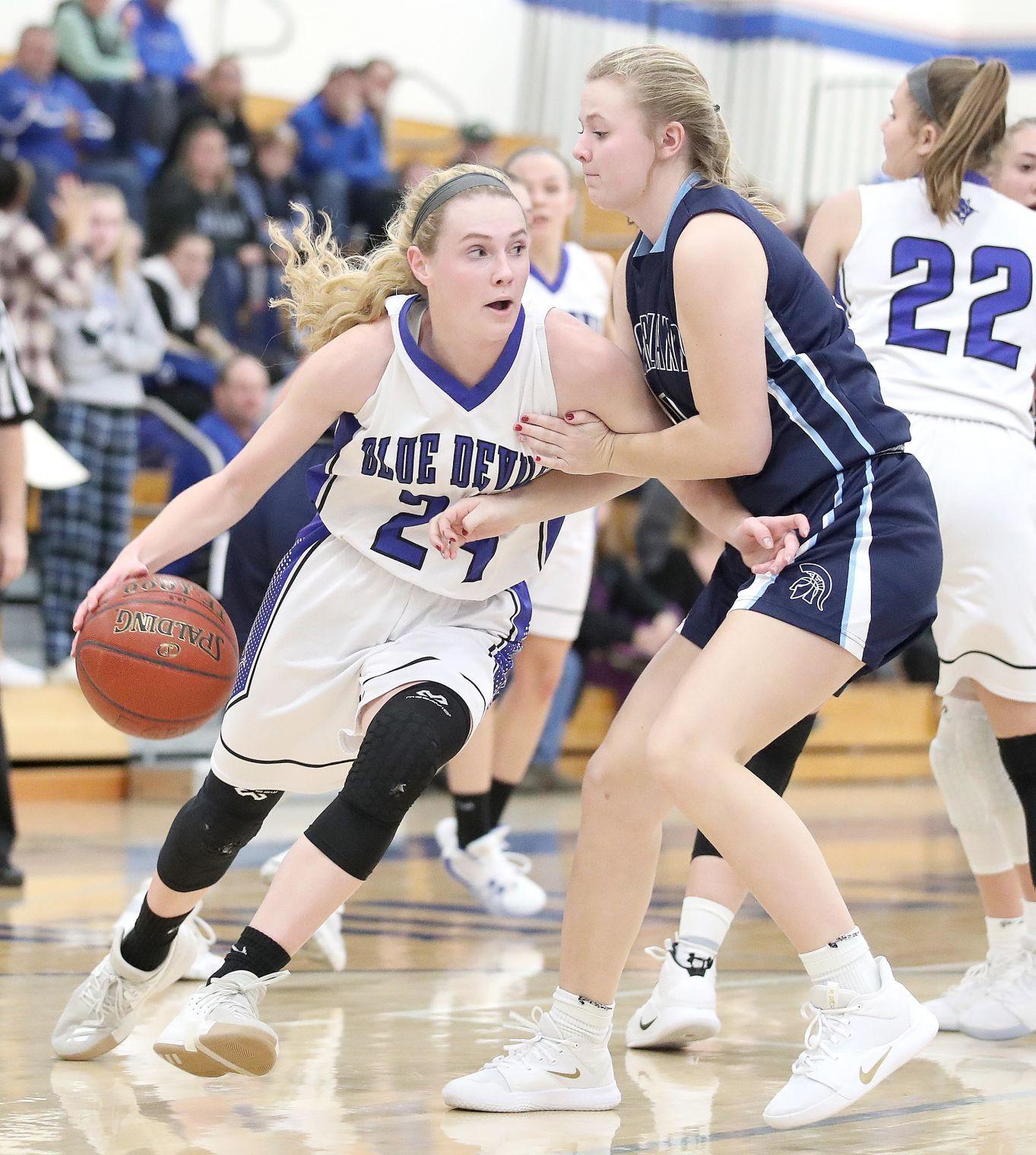 Evansville’s Abi Eftemoff drives along baseline during the first half of their game against McFarland in Evansville on Tuesday, Dec. 10.

The League of Women Voters of Wisconsin is trying to raise awareness of the political damage done through gerrymandering, but change must start with ordinary citizens, a league official said Tuesday.

Every 10 years, maps for legislative districts are redrawn based on census results and population in various areas of the state.

Erin Grunze, the league’s executive director, said her organization’s goal is to create a fairer system that accurately reflects district voters and ends gerrymandering—the process of manipulating district boundaries to favor one political party or class of people.

“We don’t want red maps. We don’t want blue maps. We want fair maps,” Grunze said during a presentation at UW-Whitewater at Rock County, which was sponsored by the Janesville league.

“I think because we have such sophistication in the map-making is why we have it used for evil and not good,” she said. “So I think what we need to do is use that technology for good, so you can create a map and see when it is less biased and more biased.”

Before 2011, Grunze said cities and counties sent recommendations to the state to help guide the maps. The system changed that year to give the state sole power in deciding the boundaries.

Gerrymandered districts have been redrawn to keep the dominant political party in power.

Gerrymandering weakens democracy, Grunze said, and it’s up to each state to fight against it. People Powered Fair Maps is a national program run by the league that aims to create fair political maps nationwide.

Grunze said Iowa offers one way to solve the problem.

In Iowa, legislative and congressional district lines are decided by a nonpartisan committee called the Legislative Services Agency. Each decade, a Temporary Redistricting Advisory Commission is created and advises the agency when asked.

Grunze said a pair of Wisconsin bills currently stuck in committee would help. The bills—SB 288 and AB 303—would allow the Legislative Reference Bureau to redraw district boundaries with help from an advisory commission.

The Wisconsin league has tried to raise awareness by writing letters to the editor, identifying which districts want reform and looking at legislative drafting, Grunze said.

Residents can help by asking their legislators to support the two bills, signing petitions, voting and staying informed, Grunze said.

“Individuals need to be empowered to help make these changes,” she said. “It can’t just be an organization going in. … It really needs to be about building and sharing power across communities and making grassroots changes.” 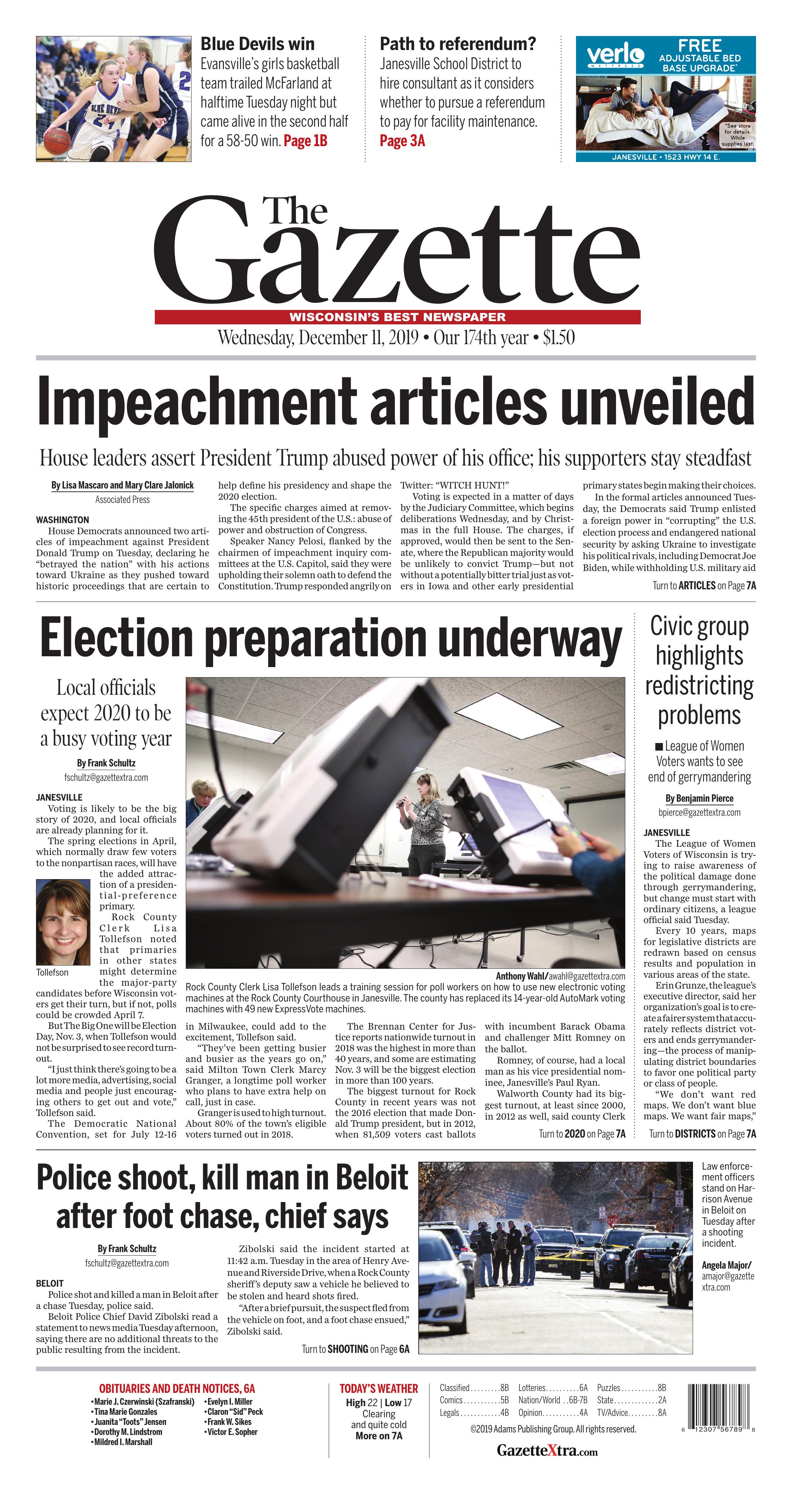