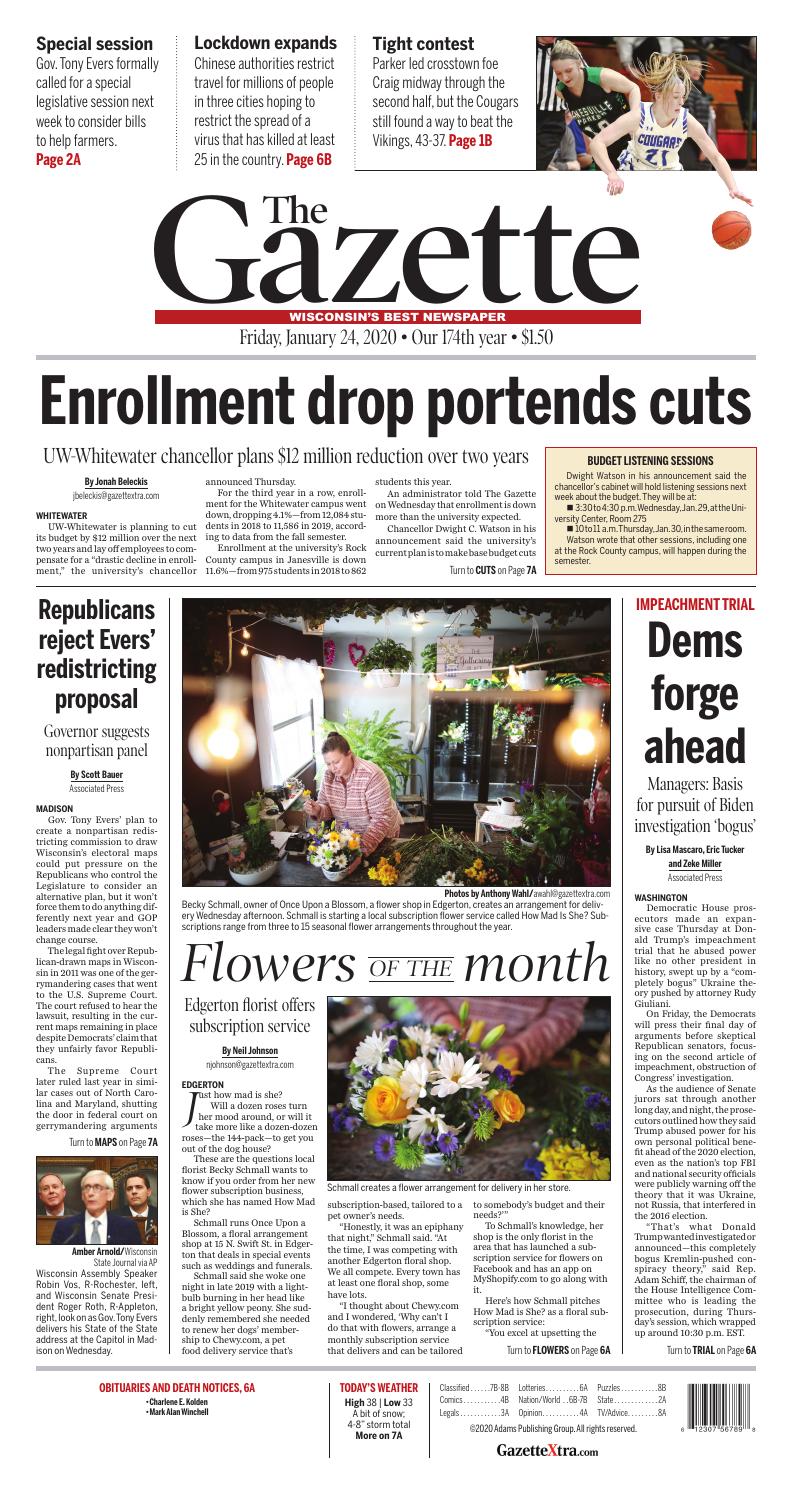 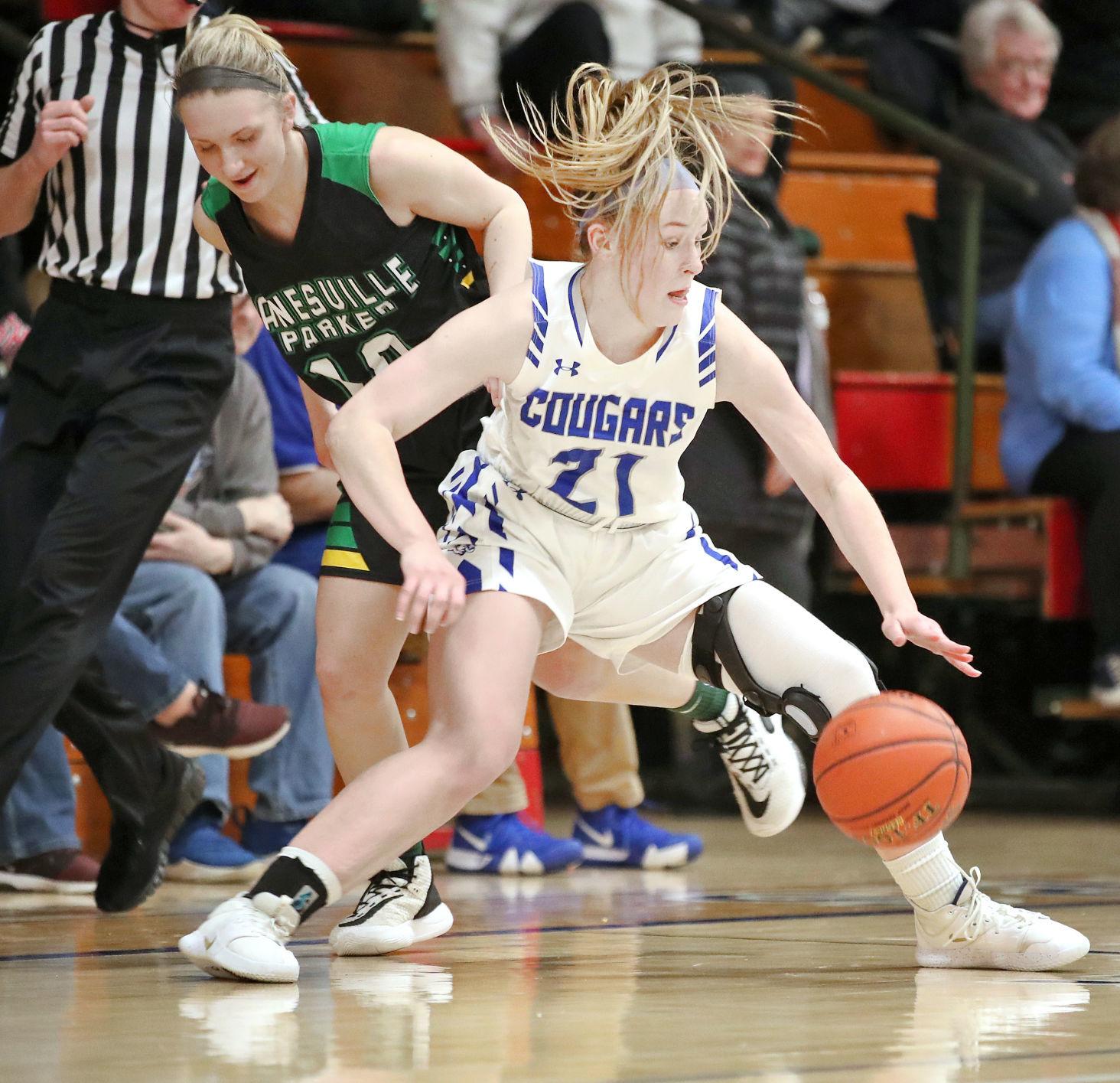 Cassie Goswick steals the ball away from Parker’s Tina Shelton during their game at Janesville Craig on Thursday, Jan. 23. Craig defeated Parker 43-37.

UW-Whitewater is planning to cut its budget by $12 million over the next two years and lay off employees to compensate for a “drastic decline in enrollment,” the university’s chancellor announced Thursday.

An administrator told The Gazette on Wednesday that enrollment is down more than the university expected.

Chancellor Dwight C. Watson in his announcement said the university’s current plan is to make base budget cuts of $6 million in fiscal years 2020 and 2021. These are not one-time reductions, he wrote.

“In the past, UW-Whitewater had robust reserves that allowed campus to weather challenges,” he wrote. “That is no longer the case, and we must align our spending to the revenue we generate.”

Along with layoffs, Watson wrote that other “immediate savings” they must make include contract non-renewals and reduction in appointment times. 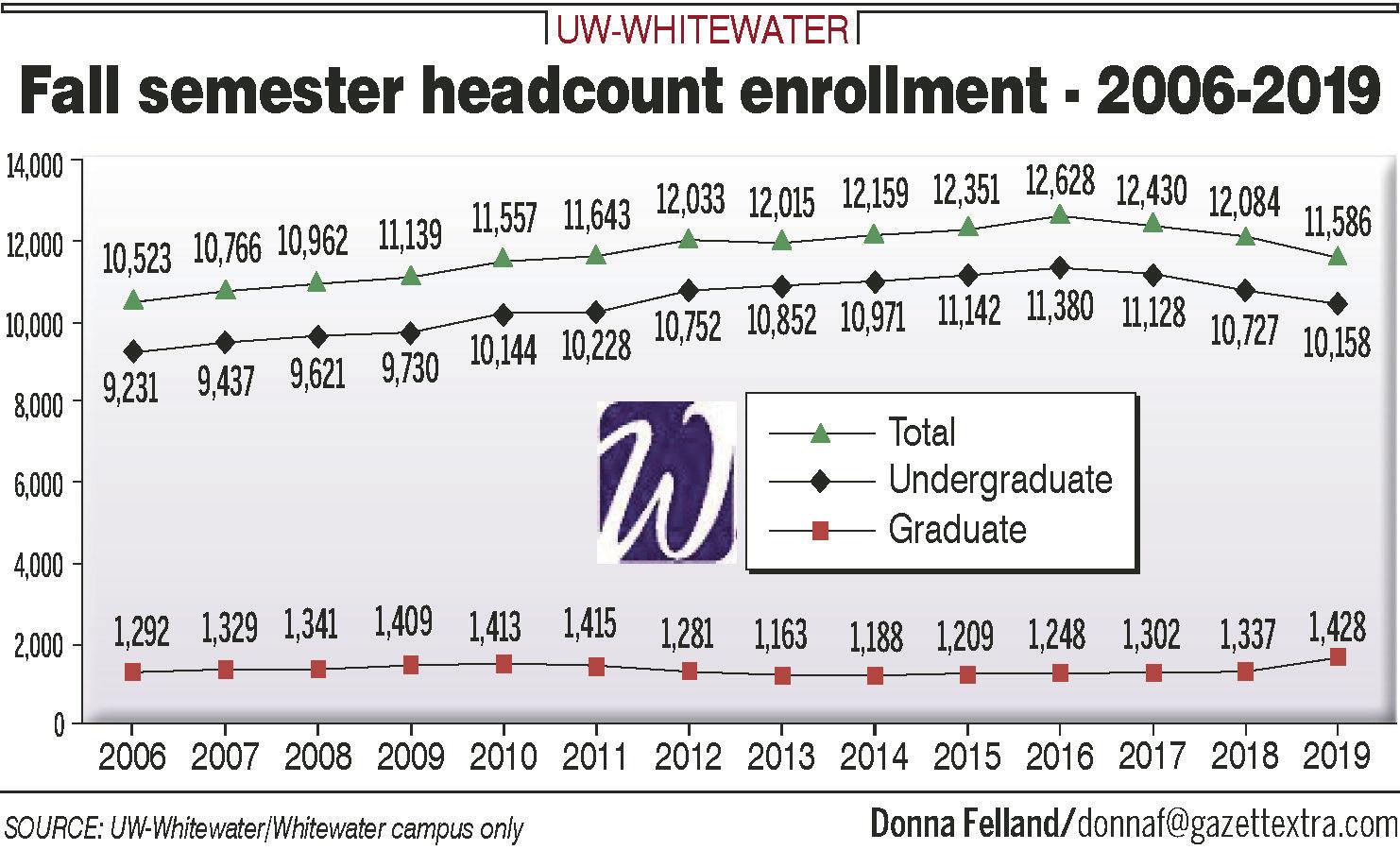 Before the latest three years of decline, UW-W had record enrollment seven times in eight years.

Tuition is a university’s “primary source of revenue,” Watson wrote, adding that the declining enrollment has cost UW-W about $11 million since the university’s peak in 2016.

Decisions will come from the division and department level, as well, with Watson saying, “All divisions have been asked to reduce operating budgets by comparable amounts.”

Reductions: Some plans here include “centralizing some operations,” posting positions only internally for the first two weeks, imposing a moratorium on new tuition reimbursement requests and returning professional development funds to previous levels.

Reinvestment: The university’s Strategic Enrollment Plan, approved in the summer, is meant to beef up numbers or prevent more losses. Some planned actions include expanding the recruitment of student populations, specifically with “Latinx students and students with disabilities;” focusing on degree-completion programs; expanding online programs and guaranteed transfer agreements with technical colleges and other two-year institutions; and increasing available scholarships.

“These initiatives need to provide enrollment growth,” Watson wrote. “For this reason, all investment initiatives will receive consistent evaluation.”

“I understand this news may be difficult to digest,” Watson wrote. “Let’s remember that UW-Whitewater has discerning and dedicated employees ... I know this is a campus that cares deeply about our students and our mission to serve, and as we tap into that dedication to UW-Whitewater we will overcome these challenges.” 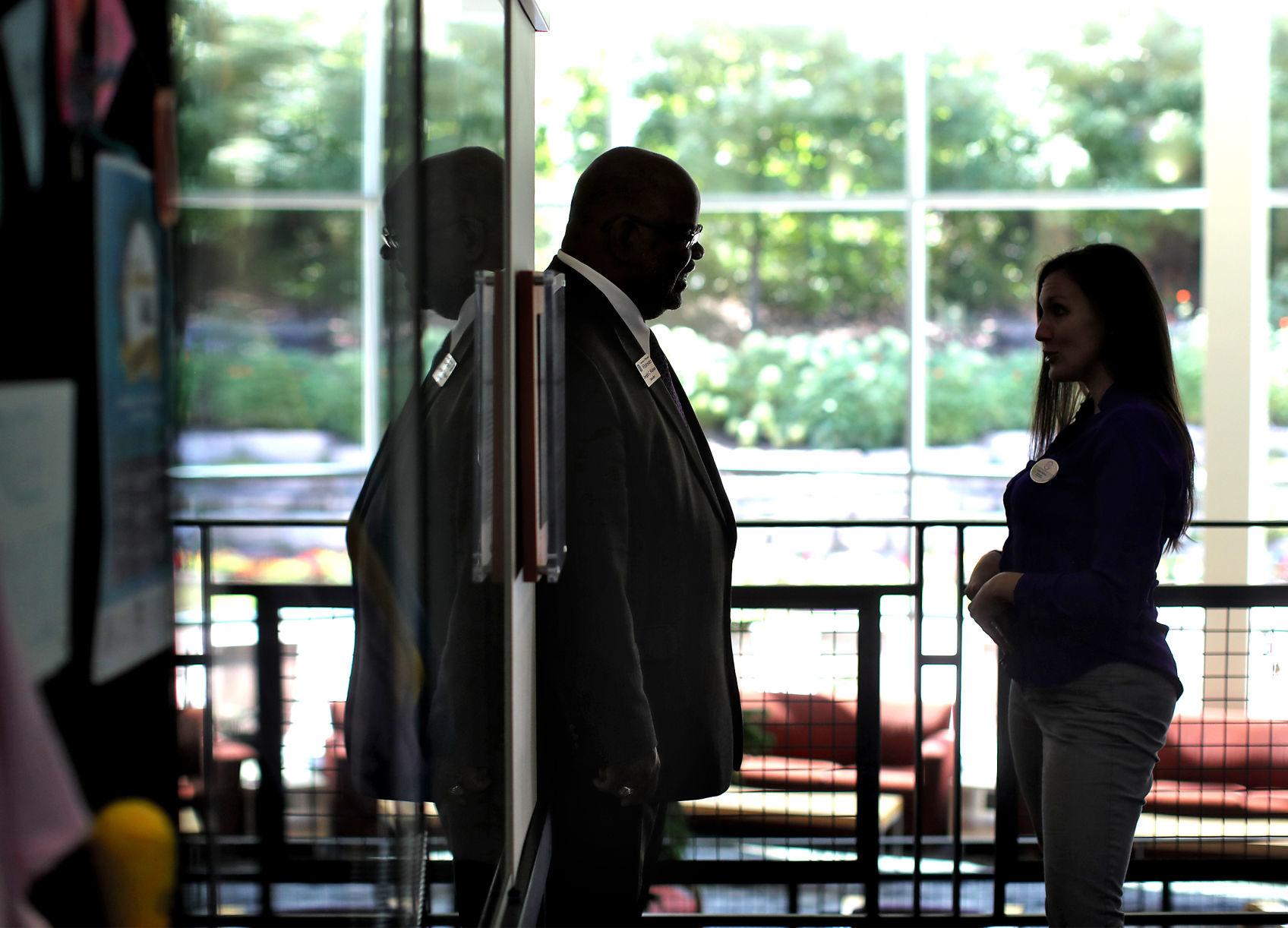 Matt Aschenbrener, associate vice chancellor for enrollment and retention, said the graduate school numbers did not increase as much as he thought they would, however.

That, combined with the decrease at Rock County and the cutting of two classes as part of the university’s Partners in Education program, contributed to the overall decrease, he said. The program allows high school students to earn university credits while still in high school.

Aschenbrener said the university has been working “diligently” in the last 18 months to change its marketing, build new programs and initiatives and make the admissions staff more closely match the region’s demographics.

He said they recently brought on a bilingual admissions counselor.

Some parts of the region UW-W recruits from are turning out fewer high school graduates, but others have more, Aschenbrener said.

Last year, the university reported seeing record-high retention of about 82%. While Aschenbrener said in a follow-up email they don’t yet have the new rate, he thought it would be “near or just below 80%, which is still a really strong retention rate compared to our peer institutions.”

University officials expressed hope that next year will buck the declining enrollment trend.

Watson wrote that an “uptick” in applications and admissions are “good signs for the fall of 2020 class,” and Aschenbrener said campus tour numbers have been up since early summer.

“We think that we’re headed in the right direction,” Aschenbrener said.

Dwight Watson in his announcement said the chancellor’s cabinet will hold listening sessions next week about the budget. They will be at:

Watson wrote that other sessions, including one at the Rock County campus, will happen during the semester.

Becky Schmall, owner of Edgerton flower shop Once Upon a Blossom, creates a flower arrangement for delivery Wednesday afternoon. Schmall is starting a local subscription flower service called How Mad Is She?. Subscriptions range from three to 15 seasonal flower arrangements throughout the year.

Just how mad is she?

Will a dozen roses turn her mood around, or will it take more like a dozen-dozen roses—the 144-pack—to get you out of the dog house?

These are the questions local florist Becky Schmall wants to know if you order from her new flower subscription business, which she has named How Mad is She?

Schmall runs Once Upon a Blossom, a floral arrangement shop at 15 N. Swift St. in Edgerton that deals in special events such as weddings and funerals.

Schmall said she woke one night in late 2019 with a lightbulb burning in her head like a bright yellow peony. She suddenly remembered she needed to renew her dogs’ membership to Chewy.com, a pet food delivery service that’s subscription-based, tailored to a pet owner’s needs.

“Honestly, it was an epiphany that night,” Schmall said. “At the time, I was competing with another Edgerton floral shop. We all compete. Every town has at least one floral shop, some have lots.

“I thought about Chewy.com and I wondered, ‘Why can’t I do that with flowers, arrange a monthly subscription service that delivers and can be tailored to somebody’s budget and their needs?’” 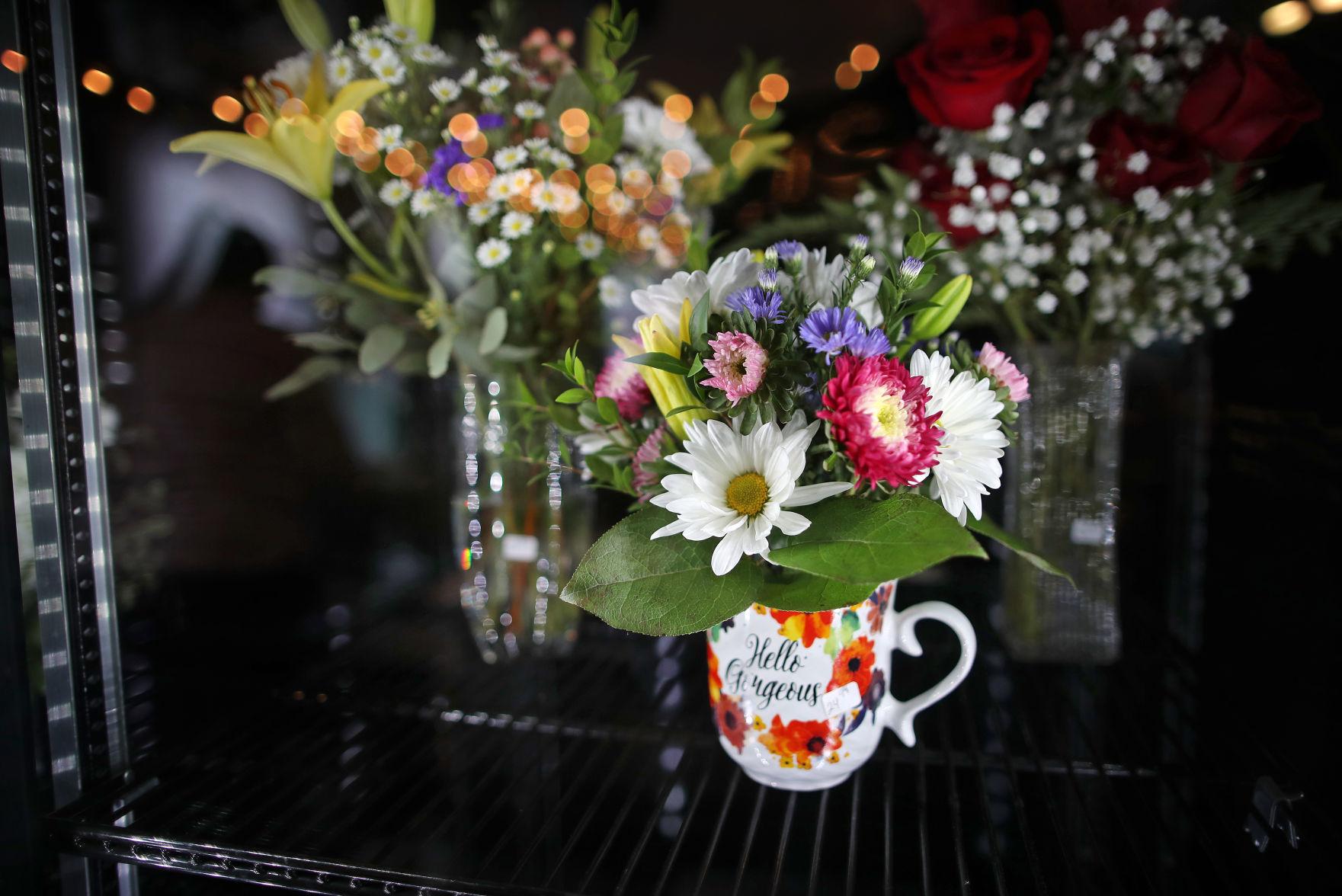 Becky Schmall, owner of Edgerton flower shop Once Upon a Blossom, starts creating arrangements early each morning hours to fill the coolers for the day.

To Schmall’s knowledge, her shop is the only florist in the area that has launched a subscription service for flowers on Facebook and has an app on MyShopify.com to go along with it.

Here’s how Schmall pitches How Mad is She? as a floral subscription service:

“You excel at upsetting the one you love the most. You do your best, but sometimes you need a little extra something to return to her good graces. We can help! Select the flower arrangement that will bring that smile back ... and get you off the couch!”

It’s tongue-in-cheek, but just maybe it works. Depends on how mad you’ve made her. And how bad the reason for the mad. And whether you’re truly sorry. And whether you remember she’s allergic to begonias.

Take the I’ll Never Let Go, Jack subscription for which Schmall poses the hypothetical: “Have you ever booked passage on a large ship (like the Titanic) that struck an iceberg, sunk, and then you shivered with your lover (Leonardo Di Caprio), while floating on a door in the ocean?”

No, but we can imagine. The I’ll Never Let Go, Jack arrangement costs $40, it’s a one-time seasonal floral arrangement for people who have found their relationship hit an iceberg and went overboard.

It might hit the spot in the weeks coming up, fellas. After all, and especially during the days surrounding Valentine’s Day, most floral orders are phoned in by men who seek a reprieve for forgetting the flowers last Feb. 14 (and the year before). 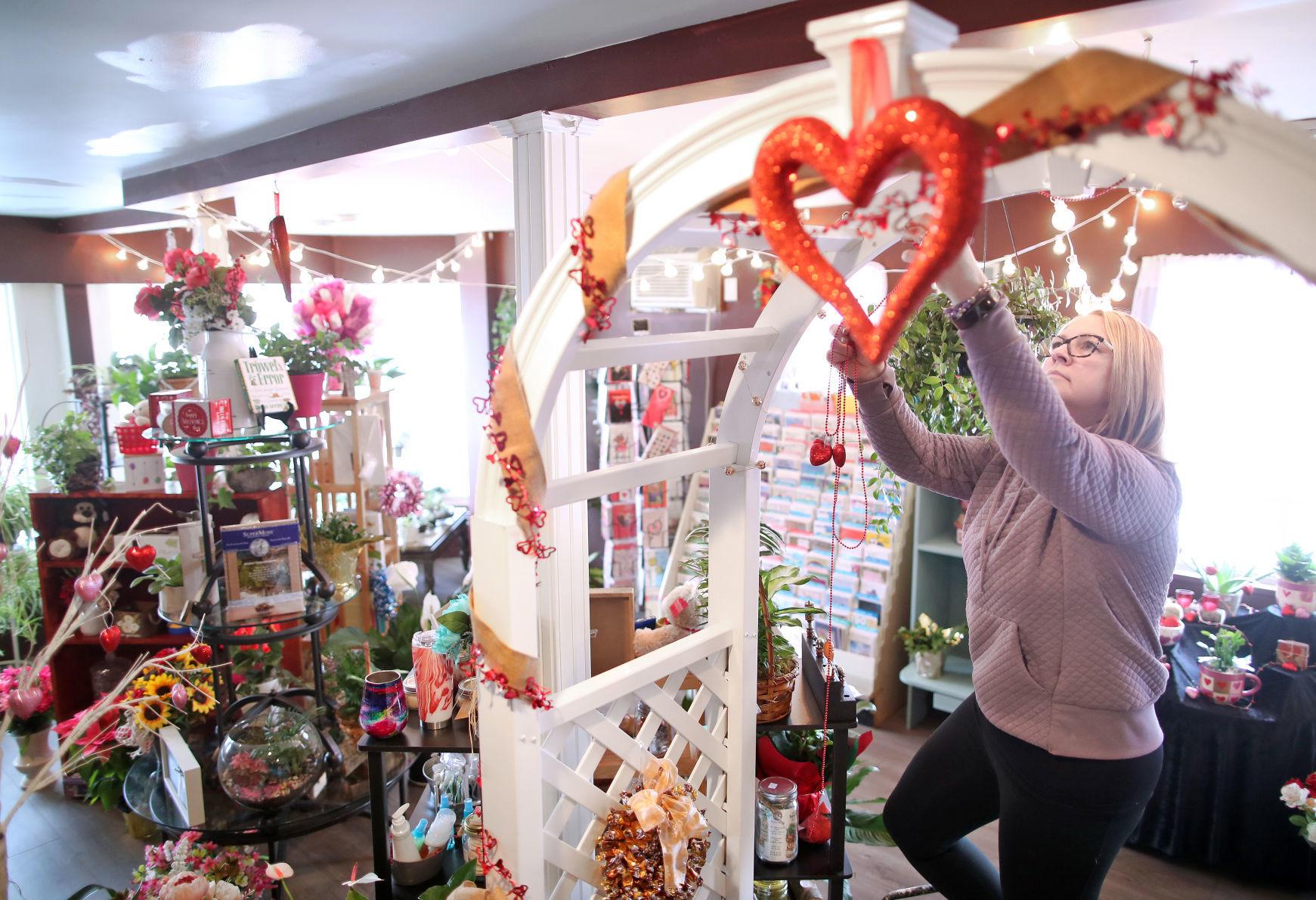 Once Upon a Blossom employee Kim Walsh decorates an archway for the Valentine’s Day season while working inside the gift and flower shop Wednesday.

Schmall said she plans to take the app national, probably through partnerships with national online floral delivery services. Because her shop in Edgerton is small, she plans to launch How Mad is She? as a local delivery subscription service for customers in Janesville, Milton, Edgerton and southern Dane County.

Cost of delivering arrangements to home or work is covered in the subscription fee.

Schmall said her flower subscription business crosses gender boundaries because sometimes (maybe not quite as often) angry young men might be cheered up by a dozen long-stem roses. 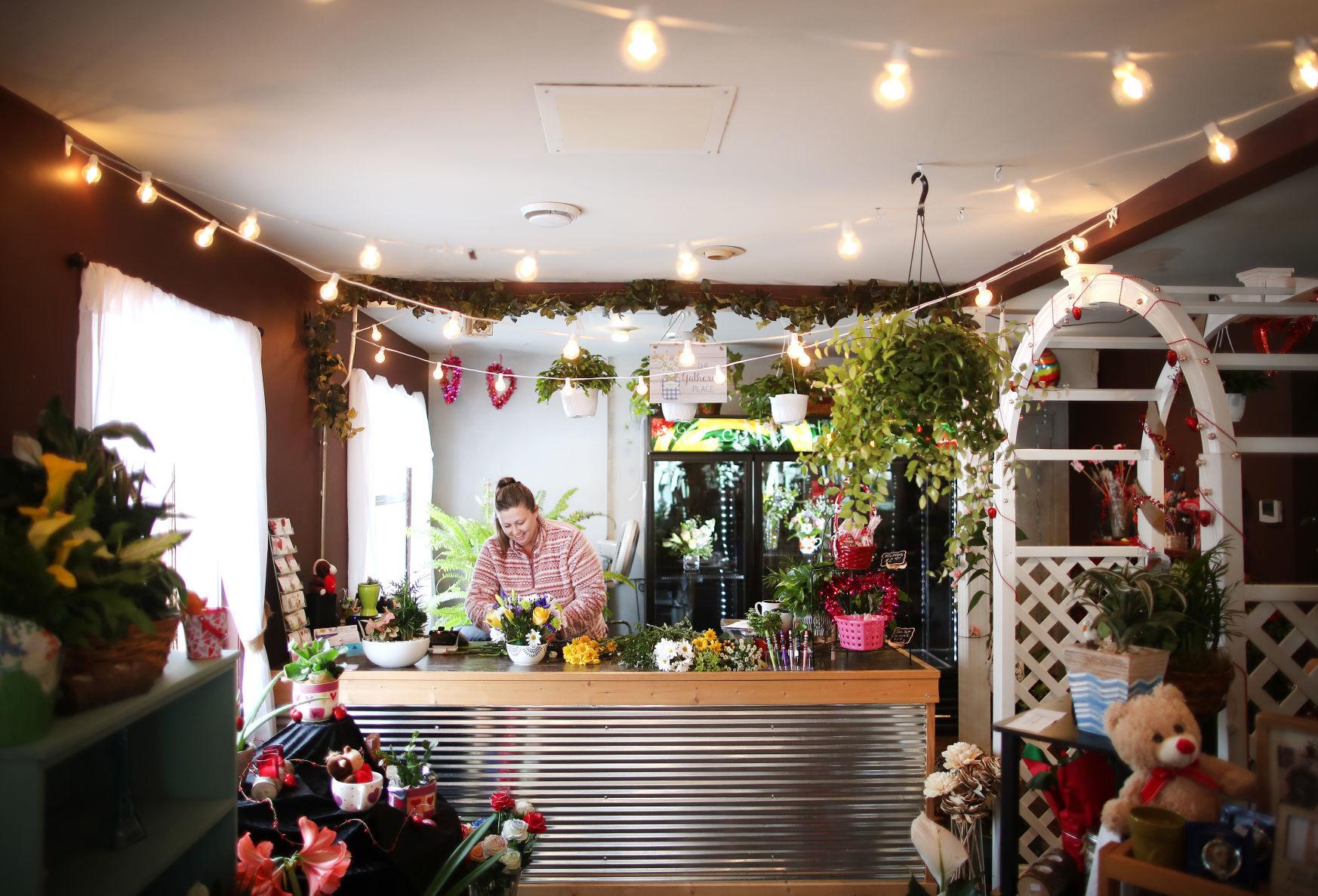 Becky Schmall, owner of Edgerton flower shop Once Upon a Blossom, creates a flower arrangement for delivery while working at the shop Wednesday afternoon.

Annual plans include the Love of My Life plan, a subscription that will deliver your angered, sad or just flowerless loved one 15 floral arrangements in one year on dates you choose by managing orders on the How Mad is She app. It costs $600, or $40 per arrangement.

For those who may suffer through fewer relationship slings and arrows, there are lesser subscriptions, such as the No Excuses Plan, a $120 annual subscription that guarantees three deliveries of flowers on important days. Such as birthdays. And anniversaries.

Or there’s the I Need 12 Roses, Stat! which is a one-time, $65 order of 12 roses. Popular, probably because it’s never clear when or in what way a guy might screw up next. 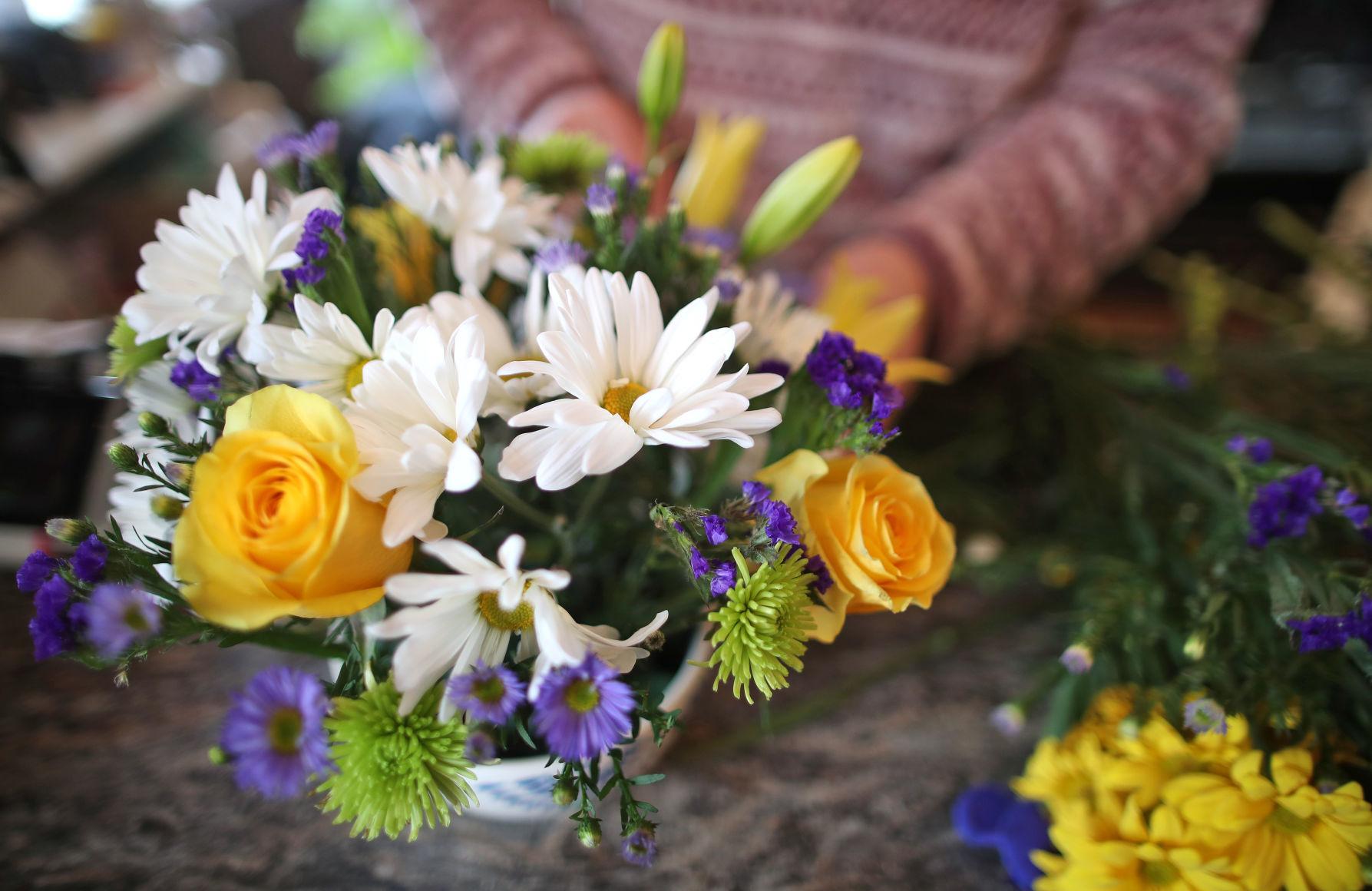 Becky Schmall, owner of Edgerton flower shop Once Upon a Blossom, creates a flower arrangement for delivery. 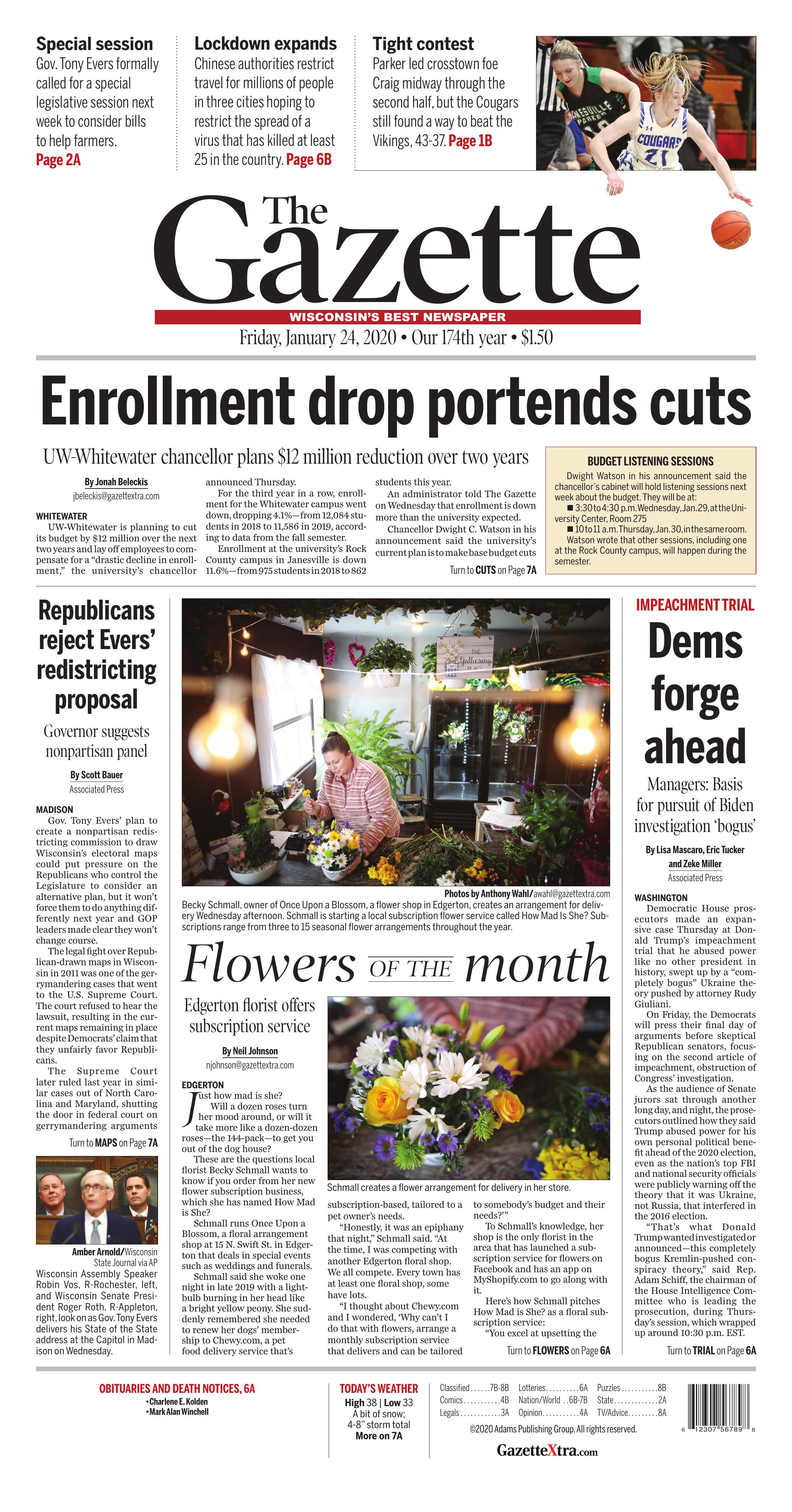