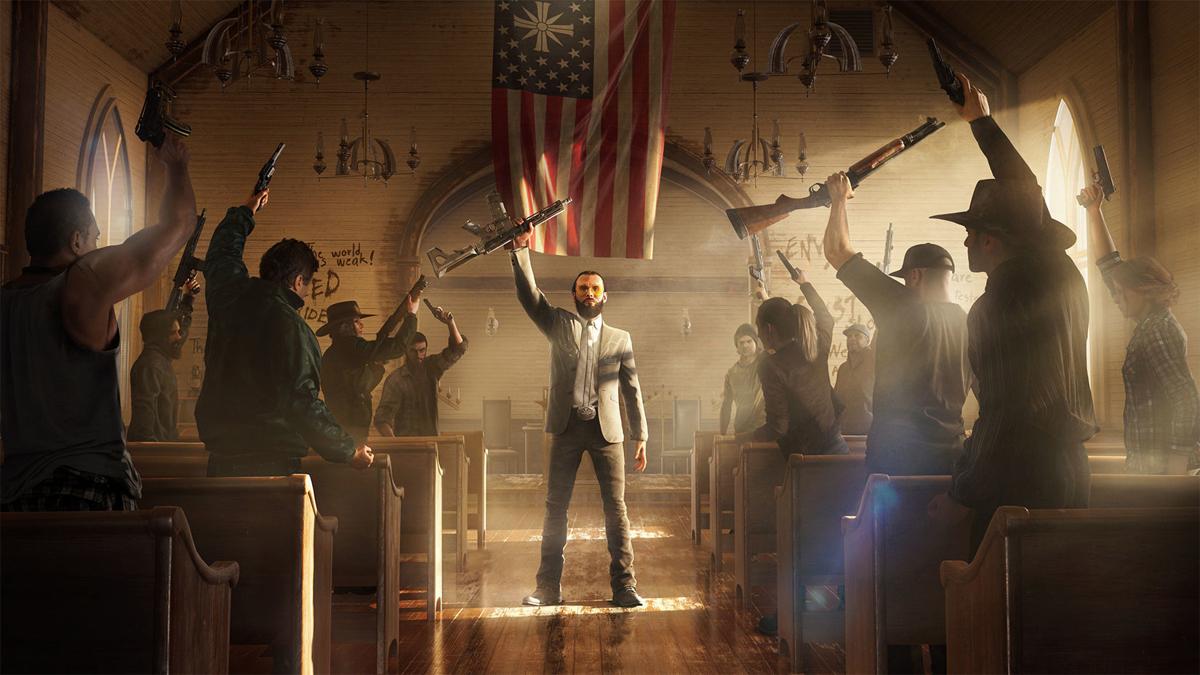 ‘Far Cry 5’ takes players to the fictional county of Hope Montana, where a religious cult has taken over the area, writes Gazette gaming columnist Jake Magee. 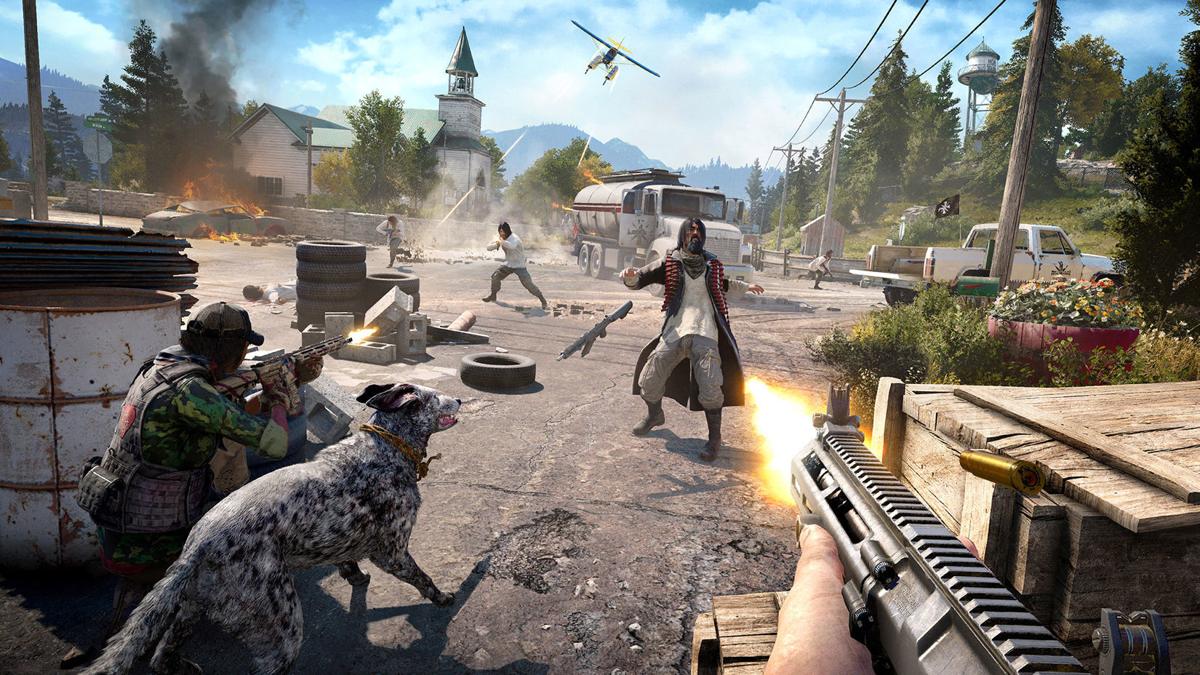 The main attraction is ‘Far Cry 5’ is the shooting, and the game gets it right, writes gaming columnist Jake Magee.

‘Far Cry 5’ takes players to the fictional county of Hope Montana, where a religious cult has taken over the area, writes Gazette gaming columnist Jake Magee.

The main attraction is ‘Far Cry 5’ is the shooting, and the game gets it right, writes gaming columnist Jake Magee.

I accomplished a lot in my time with “Far Cry 5.”

I blew up a giant statue and hallucinated on a far-out drug called bliss. I threw shovels like javelins through enemies’ chests, pinning them to walls and tree trunks. I sicced a diabetic bear named Cheeseburger onto hordes of bad guys and watched him rip them apart.

Through it all, I helped liberate an area of Montana from the clutches of a religious cult and then watched my efforts go to waste with a self-defeating ending.

“Far Cry 5” is the series in its truest form, and despite some glitches and story hiccups, it’s a wildly fun ride.

In a series first, “Far Cry 5” is set stateside instead of in some exotic locale. Taking place in fictional and beautiful Hope County, you play as an unnamed deputy trying to wrest control from Project at Eden’s Gate, a militant and fanatical group that has taken over the area while preaching the end of the world.

“Far Cry 5” garnered a lot of unwarranted controversy for failing to take itself too seriously and instead remain true to what the series has always been: a pretty ridiculous excuse to shoot tons of bad guys. Like a good episode of “South Park,” “Far Cry 5” is hilarious, and it pokes fun at everyone while still presenting creepy and strangely charming antagonists you love to hate. The tonal shifts didn’t bother me; I took them all as part of what makes “Far Cry” the unusual and engaging franchise it is.

But far more important than the story is the gameplay, which is by the far the primary reason anyone plays “Far Cry.” Luckily, “Far Cry 5” is satisfying and more freeing than prior versions.

After a short introduction, you are encouraged to explore Hope County with minimal guidance. No part of the map is locked off, giving you a realistic sense of freedom.

While the map doesn’t have much information to start, blurred areas begin filling in as you move around the map, talk to people and read notes that mention key locations. The result makes exploration feel completely natural and organic.

Just as freeing is the new player progression system. Instead of having a skill tree with abilities unavailable until you unlock previous ones, “Far Cry 5” lets you buy whatever ability you want from the get-go. That is, provided you’ve earned enough perk points, which are earned by completing challenges largely through normal gameplay.

Want to buy stealth skills right off the bat to make yourself as sneaky as possible? Go for it. Would you rather unlock abilities that give you access to grappling hooks, parachutes and a wingsuit to make traversing Hope County easier? You’re in control, and it’s a liberating feeling.

Even how the story progresses is more open. Instead of having to conduct specific story missions to progress through the game, you earn resistance points in three sections of Hope County. Once you get enough points, you reach a new juncture in the narrative—and it’s up to you how to get there.

Sure, you can do story missions—and they’re a lot of fun—but there are other options such as blowing up silos and altars, freeing hostages, and defeating outposts—one of the most fun parts of any “Far Cry” game.

That said, the narrative isn’t stellar—especially the ending. While I enjoyed the villains and heroes I met along my journey, the story is largely a backdrop for shooting people in Montana—and that’s fine with me.

With that pursuit of player choice comes the ability to create your own character. Instead of playing as a named character, you make and dress your own as you see fit. It seems like a nice feature, but it’s largely pointless because you rarely see your own character. Also, having customizable protagonists means the character isn’t voice-acted, which means he sits there silently in cutscenes when characters address him.

Of course, none of that is as important as “Far Cry’s” main attraction: the shooting, which is as tight and frequent as ever. I constantly found things and bad guys to shoot at, and it never got old.

When you get bored with blowing stuff up, “Far Cry 5” has stashes hidden in doomsday bunkers you can find and loot. Each is an environmental puzzle, and while they’re only short distractions, I found them engaging.To access one, I had to snipe a lock off a door from across a lake. To get to another, I had to endure a cheesy haunted house that used real corpses in place of animatronic props. They’re a nice alternative way to rack up cash and perk points.

“Far Cry 5” offers plenty of other sideshows, as well. You can race against the clock in various vehicles, hunt wild animals, fish, climb mountains, trek through forests and more. I relished every opportunity to explore the gorgeous Montana landscape.

It’s too bad glitches sometimes ruined my fun. One time after dying, the game took nearly a minute to load only for me to respawn in the air and immediately fall to my death, instantly restarting the annoying cycle. The fall was almost too quick for me to pause the game and fast travel out of there, but after 20 minutes of trying, I managed to do so. For a while, I thought I was going to have to start a new game.

Other glitches removed characters’ audio or had physics that acted funky. They weren’t game-breaking, but they were annoying.

“Far Cry 5” does everything you’d expect a “Far Cry” game to do but also gives you greater freedom in which to do it. Everything from map exploration to skill progression to how the story unfolds is entirely up to players. It’s just a shame your character is silent and that glitches sometimes taint the fun.

“Far Cry 5” was reviewed on the Xbox One with a digital copy bought by the reviewer.

Video game columnist Jake Magee has been with GazetteXtra since 2014. His opinion is not necessarily that of Gazette management. Let him know what you think by emailing jmagee@gazettextra.com or following @jakemmagee on Twitter.