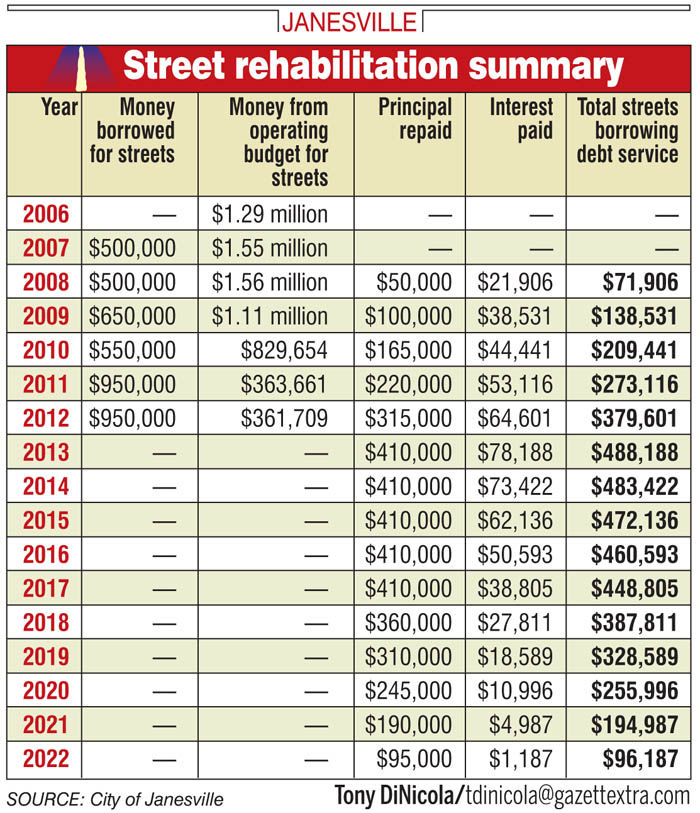 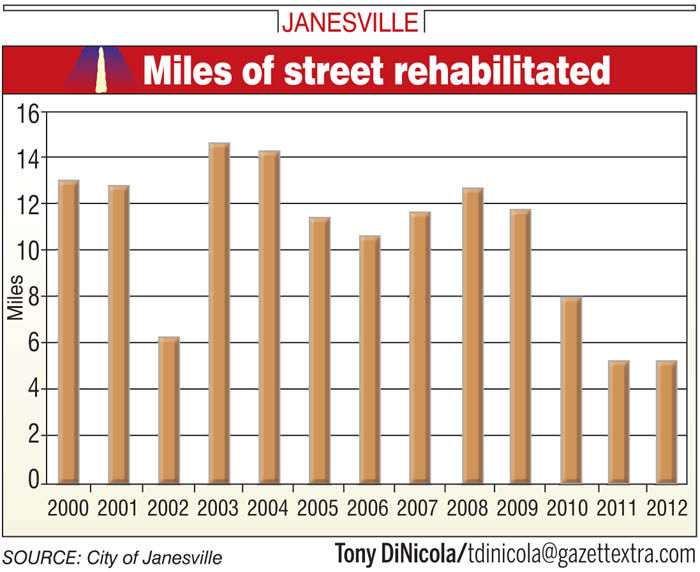 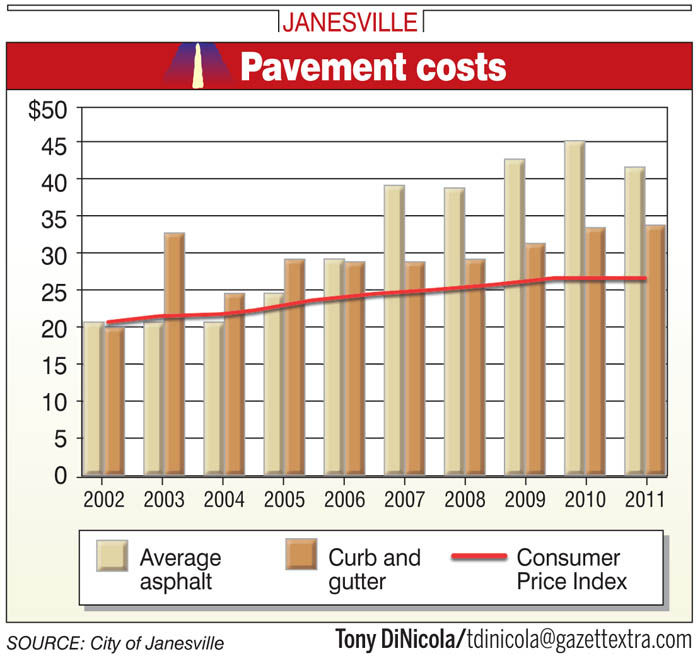 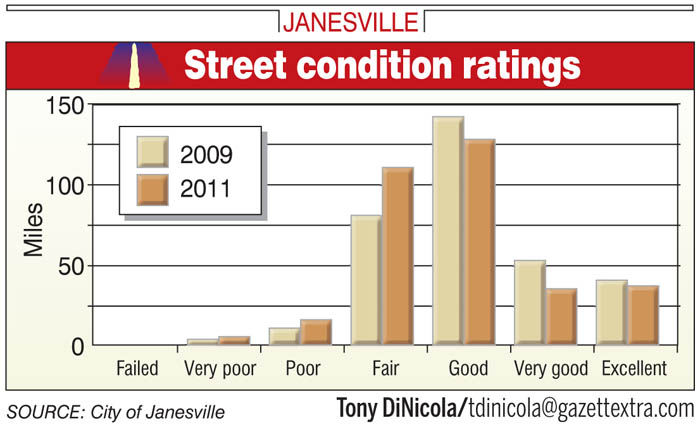 "The impact is a long-term impact and really relates to the recent trend of doing less and less on street maintenance," Mike Payne, city engineer, said.

"Every year, we're borrowing more money … and getting less bang for our buck," McDonald said.

The city faces a perfect storm:

-- Asphalt costs that have doubled in 10 years.

-- Streets installed during a building explosion all coming due for maintenance at the same time.

Janesville is responsible for about 335 miles of street and does minor pothole patching on about 10 additional miles of state-owned roads.

But even with more borrowing, Janesville is completing fewer miles of road renovation each year.

To keep up with the rate of street decay, the street program should include 15 to 20 miles per year, Payne said.

The situation caused staff in February to ask council members to abolish its $950,000 borrowing cap to add nine-tenths of a mile to the 2012 street program. The cap, in place for only six months, would have allowed about five miles of street reconstruction. Staff wanted to fix 5.9 miles.

Council members declined to abolish the cap but clearly were uncomfortable doing so, noting that the new council will face some tough decisions.

"A major responsibility of any municipality is to manage and maintain its street pavement," Carl Weber, director of public works, wrote in a recent report.

The city inspects its streets every two years, rating them in seven categories from "failed" to "excellent."

Street maintenance includes routine procedures such as crack sealing, pothole patching and limited surface repairs. The most expensive are pavement reconstruction and resurfacing.

Resurfacing restores the surface while retaining most of the street's structure.

Reconstruction replaces both the base and the surface. It usually also involves curb and gutter and driveway apron replacements.

National studies show that a street deteriorates from "excellent" to "fair" in about 22 years and drops to "fail" after eight more years, Weber said.

Resurfacing a street in fair condition protects the base and extends its life. National studies show the cost to restore a "very poor" street is four to five times that of a "fair" street.

In the past 10 years, cost of asphalt has risen 95 percent, and the cost of curb and gutter replacement has jumped 68 percent. During the same 10 years, the consumer price index rose by 21 percent, Weber said.

Meanwhile, in the last two decades, the number of Janesville streets built has doubled.

"The building boom of the last two decades will begin to impact our street maintenance needs in a very significant way," Weber said.

"As such, we can expect the streets in need of improvement to accelerate in the years to come as the streets built in the '90s begin to drop below 'fair' condition," Weber said.

Based on the current level of funding and the typical rate of deterioration, by 2021 about 169 miles of city streets—more than half—would be rated "poor" or worse.

"Clearly, this results in a severely deteriorated street network," he said.

Staff recommends the council keep pace by approving at least 15 miles of street rehabilitated in 2013. But even 15 miles a year might not be enough to keep pace. It might have to do more to keep the majority of streets in "fair" or better condition, Weber said.

Janesville traditionally covered the cost of street maintenance with its operating budgets, meaning the money was levied yearly on a "pay-as-you-go" basis.

McDonald said street maintenance should be viewed as routine work because it is done every year.

Others defend borrowing for street repair, saying it is appropriate because streets last for decades and people who use them should pay for them over a decade.

In 2011, the council capped borrowing at $950,000 unless a supermajority of council members agreed to borrow more. The hope was that future councils eventually could get back to paying without borrowing.

Weber's report made it clear that drastic increases are needed if the city is to keep up with its streets.

Council member Sam Liebert said the city should be spending double or even triple on rehabilitation, repairing 10 to 15 miles rather than this year's five miles.

Councilman Russ Steeber said he didn't know what the solution is, saying the council is "stuck between a rock and a hard place." He doesn't like paying for it through the general fund because the cost depletes available money, but he doesn't like borrowing for it, either.

"Frankly, as a taxpayer, I'd rather be paying for the streets now and not kicking it down the road," McDonald said. "It's a trend that needs to be turned around."

McDonald called it a "fiscally irresponsible program" that is "devastating" the city's finances. He figures the city should be spending $3.5 million to $4 million annually on road maintenance so the streets do not fall into disrepair. The city will spend about $1.31 million this year, including $361,709 from the operating budget.

McDonald urged council members to return to pay-as-you-go, even if it means raising taxes and reducing services.

"A business operating in this manner would soon be out of business," McDonald said. "People who run their personal lives this way go bankrupt."

If the trend continues, only two outcomes are possible for Janesville, he predicted.

"Either raise a ton of revenue—most likely astronomical tax increases—or default on the debt and not pay back the investors. Both scenarios would be devastating to the community," he said.

The new council elected in April will decide how much money to spend on roads and where to get it.

Pay as you go or borrow?

That is the question the new Janesville City Council must answer when it decides this year how to pay for street maintenance in 2013. Its decision could raise taxes and/or cut services.

Past councils borrowed increasing amounts to pay for street maintenance, which costs more in the long run but allowed them to maintain city services without huge increases in the tax rate. It also allowed councils to keep operating budgets under mandated state caps. Borrowing is not covered by the caps.

Some council members want the city to return to the pay-as-you-go system it used before 2007.

City staff said the number of streets that need fixing is increasing because those built during the '90s building boom are coming due for work.

Four of seven seats are open on the council, and the nine candidates running were asked how they would pay for street rehabilitation.

"We need to find a balance, and it is my job as a non-partisan council member to be as transparent with taxpayers as possible, communicate effectively with our city leaders, employees, and taxpayers to determine which (is) the best possible solution."

"Borrowing simply reduces the flexibility of services the city is able to provide in future years due to repayment of debt," Severson said.

The city over the next few years should return to a pay-as-you-go system, he said.

"Having plowed roads during the winter and streets we can drive down without hitting a pothole every half a block is not a 'want.' It is a 'need' that has a price tag," she said.

Smillie prefers to put the expense back in the budget.

"We have seen what happens when maintenance of buildings and other infrastructure is deferred, the taxpayers are asked to vote on million dollar referendums to get 'caught up.'"

The majority of street maintenance should be done using a pay-as-you-go system, he said.

"This may mean increased taxes, and as long as that money would go specifically to street maintenance, I would consider it," he said.

At the same time, the council should look to ways to decrease expenses, such as costs associated with the senior center, golf courses and similar items. Residents and organizations may need to step up and provide additional support if they want the current level of service to remain, he said.

It is not uncommon to borrow for street maintenance, and it's not necessarily a bad thing, she said.

"The question is, 'How much is too much?' There are areas to review that could impact either a pay–as-you-go system or borrowing for street maintenance that should be addressed. We have an opportunity to assess the number of roads/miles scheduled for maintenance, as well as evaluate the ability to have flexibility in road maintenance when a non-scheduled road is in need of repair," she said.

"Increasing revenue through fees or through the increase of tax rates is not the answer. Giving the government more money only means that the government has more of our money to waste," he said.