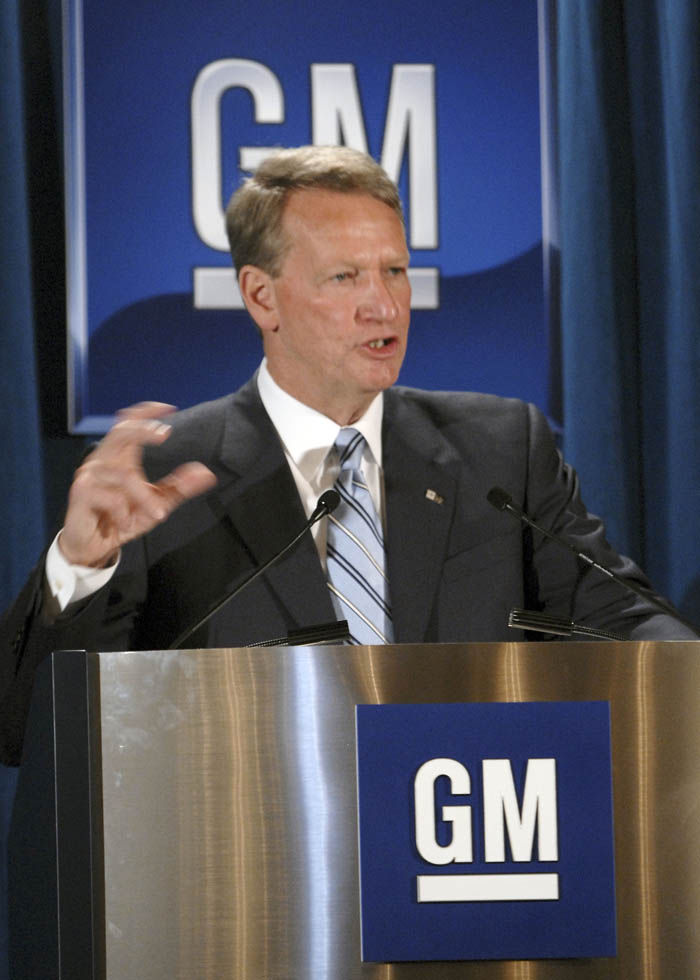 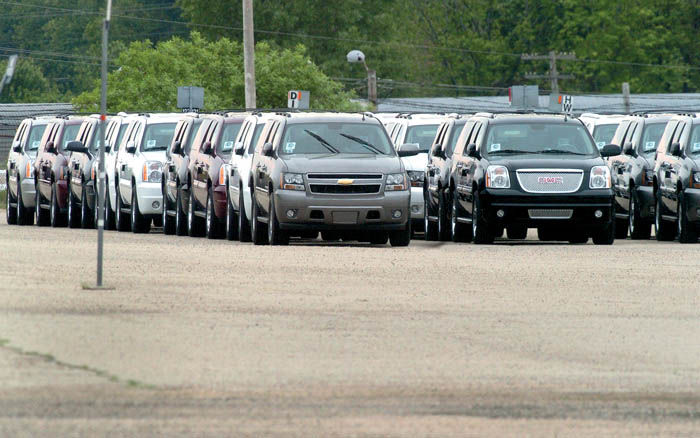 That has forced the automaker to shift its product mix, one that will move from a 50-50 balance of cars and trucks to one of 60 percent cars and 40 percent trucks.

“There are changes in market conditions here in the U.S. that we believe are far more structural than cyclical,” Wagoner said, adding that 18 of the next 19 new product launches GM is planning involve cars and crossovers.

In addition to the closure in Janesville, Wagoner said, GM will close a pickup truck plant in Oshawa, Ontario, a mid-size SUV plant in Moraine, Ohio, and a medium-duty truck plant in Toluca, Mexico.

First-shift employees at the Janesville plant learned this morning of GM’s decision—one that has been feared in Rock County for decades.

John Dohner Jr., United Auto Workers Local 95 shop committee chairman at the plant, said that while the plant’s closure had been rumored for years, the reality of this morning’s announcement shocked his co-workers.

“It’s bull----,” Dohner said when asked for his reaction.

“This plant and these people have done everything they can do to work with this company,” Dohner said. “We ratified the national agreement; we’ve jumped through the hoops with all the re-rates, both up and down, and we’ve always produced a quality vehicle.

“This has absolutely nothing to do with there being an issue about union and management not getting along. We’ve worked together, and management hates to see this just as much as the union does.”

Dohner said the union has no indication whether the plant will close sooner than the 2010 date that Wagoner announced.

“All I know about that is we’re set up for one shift at 58 jobs per hour starting in July,” he said.

“At the end of the day, this segment of the marketplace has almost collapsed,” Clarke said. “The decision is how we allocate our capacity.”

GM officials also said today that the plant’s medium-duty Isuzu truck line in Janesville will end production by the end of 2009. It employs fewer than 50 workers.

GM last spared the Janesville plant in 2005, when it pledged a $175 million investment to retool the plant for the newest version of Chevrolet Suburbans and Tahoes and GMC Yukon XLs and Yukons.

That product is expected to expire in 2010, as is the Janesville plant.

Wagoner said GM’s plant in Arlington, Texas, will be its sole producer of full-size SUVs after 2010 and will be able to meet the dwindling demand. In addition to Suburbans and Yukons, the Arlington plant builds the Cadillac Escalade, the Escalade ESV and the two-mode hybrid Tahoes and Yukons.

GM’s plant in Silao, Mexico, which has also built Chevy Suburbans, will primarily build full-size pickups and the Chevy Avalanche.

“It’s no fun choosing any plant (for closure),” Wagoner said, adding that the decisions were based on product mixes at the various plants and changing consumer behavior.

Wagoner said it’s “highly unlikely” that any of the four plants tagged for closure Tuesday will be assigned a new product.

“These are very serious decisions that are difficult for the people affected,” he said. “They are made after very careful study.

“It’s not likely that any new products will be assigned to the plants scheduled to cease production, and it would be inaccurate for me to leave anyone with a lot of optimism about that.”

Clarke echoed that comment, saying the automaker’s decision reflects its view on the current and future market.

Wagoner said GM doesn’t expect its truck market to improve any time soon. Sales numbers due out later today were expected to continue the trend of declining SUV and pickup deliveries. For the fourth quarter of last year, GM averaged about 105,000 sales of the big trucks each month. That number has fallen to about 65,000 vehicles, he said.

GM’s truck plants recently were affected by the American Axle strike, which started affecting Janesville in March and cut production in Janesville by about half until this week, when the plant returned to two-shift production.

Some industry analysts suggested the UAW strike against American Axle would help GM deplete its inventories of big trucks.

Clarke told The Janesville Gazette in February that he expected truck sales to rebound in the second half of this year, but the numbers over the last six to eight weeks have altered his outlook.

“The numbers that came in for May are so startling,” he said. “I hope May is not an indicator of things to come.”

Tuesday’s announcement was the equivalent of the other shoe dropping for the Janesville plant. In April, GM said it would cut second-shift production in Janesville and eliminate up to 756 jobs in July.

The automaker also is wrapping up a special attrition program that is expected to cut its hourly workforce of 74,000 by 25 percent. In Janesville, about 600 of the plant’s 2,400 hourly workers plan to leave the plant later this month. Today’s announcement will not affect the buyout agreements.

Soon after GM announced its impending production cut, seating supplier Lear Corp. said it will lay off up to 336 of its 670 hourly employees. LSI, which sequences parts into the plant, said it will eliminate up to 132 of its 235 jobs. They are expected to end production entirely by 2010 when GM shuts down here.

“This was an extremely difficult decision for us to make,” Clarke said. “They’ve done a fine job at that facility producing great vehicles.

“We’ve had a great relationship with the people and the community.”

1882—You can argue that General Motors began in Janesville in years before the company officially located here, with Janesville Machine Co.’s start in manufacturing farm machinery.

1901—First American car to be manufactured in quantity was the famous curved-dash Oldsmobile runabout.

1918—General Motors bought the Janesville Machine Co., merged it with Samson Tractor Co. of Stockton, Calif., and built a new plant for Samson operations in Janesville.

1970—GM announced that all its 1971 cars would be able to operate on low-leaded or unleaded gasoline.

1983—Janesville’s second-shift car-line workers called back to work. Full employment now is 6,500, of whom 5,600 are hourly employees.

1986—GM announces that Janesville will receive crew-cab pickups as an interim product with 1,100 people, 700 fewer than the previous pickup line.

1987—GM announces that Janesville will receive the remodeled version of its medium-duty truck, which will be transferred here from Flint, Mich. Total employment, hourly and salaried, stands at 6,500.

2002—Production of medium-duty trucks moves back to Flint, Mich., taking 800 jobs from Janesville.

2004—GM announces the next generation of full-size SUVs will be made in Janesville and two other plants.

2005—Chevrolet Suburban receives a three-peat “Best in Segment” designation in the J.D. Power Initial Quality Study. GMC Tahoe is ranked second and Yukon is ranked fourth in the segment. The 50,000 Isuzu/GM gas low-cab forward medium-duty truck is built. Preparations are underway for the new GMT900 line of products. The Janesville plant produces its 16 millionth vehicle.

Also, in November of this year, the GM plant in Janesville escaped a closing or production cutbacks list. It was told that it would continue building full-size sport utility vehicles such as the Chevrolet Suburban and GMC Yukon for the foreseeable future and perhaps the entire product cycle—six to eight years—of GM’s next generation of full-size SUVs—if the market allowed.

2008—GM announces it will eliminate the second-shift and about 750 jobs at the Janesville plant in July. Before the announcement, employment stands at a total of a little more than 2,800.