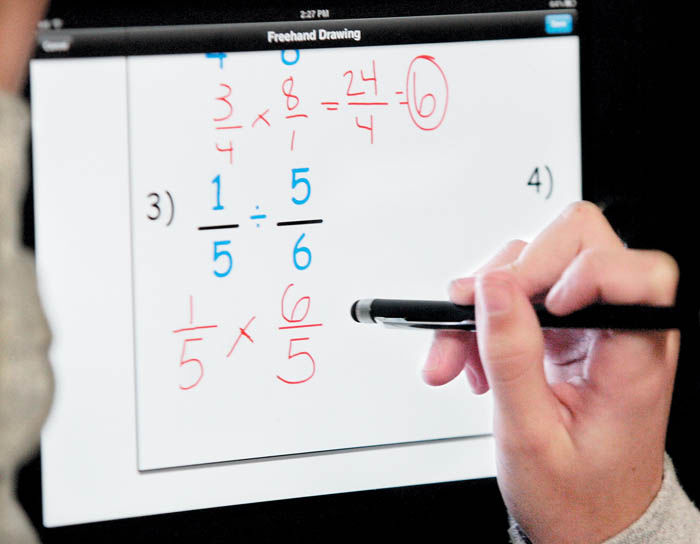 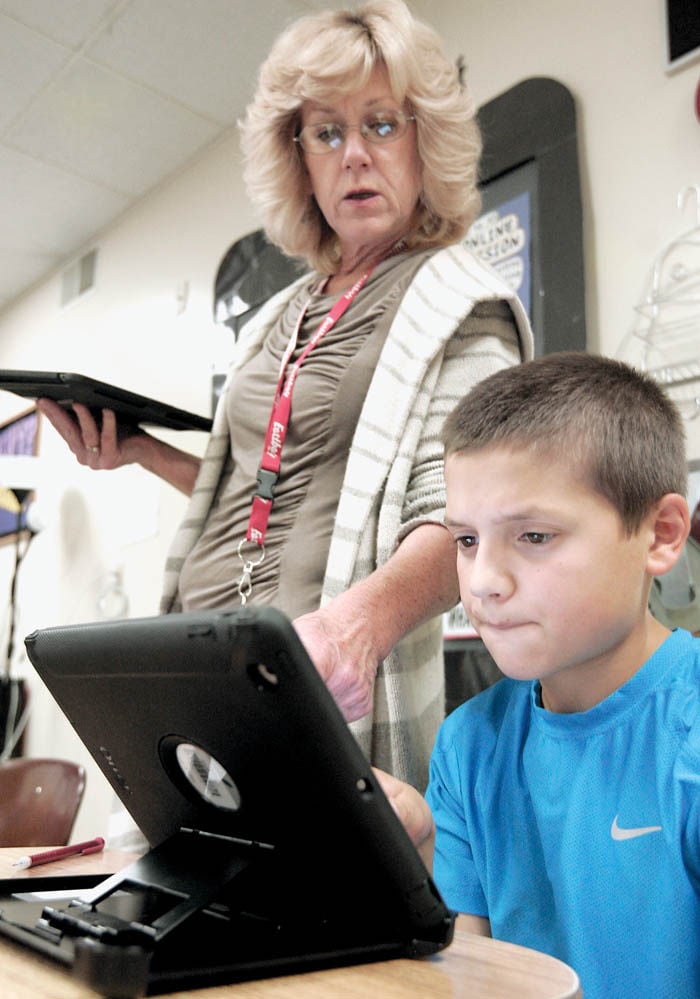 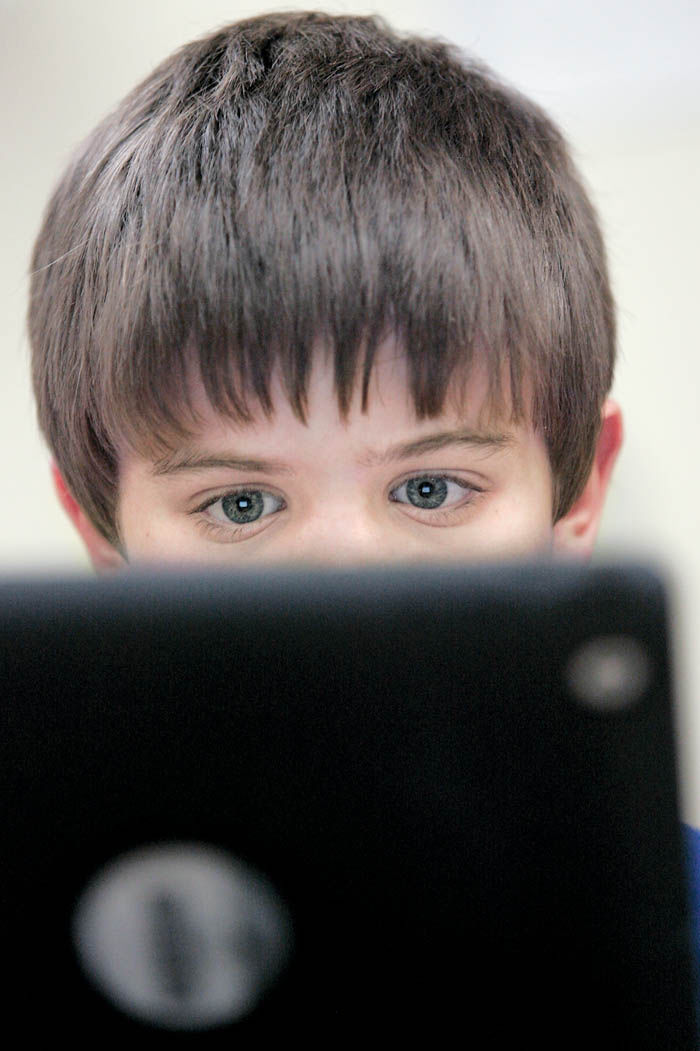 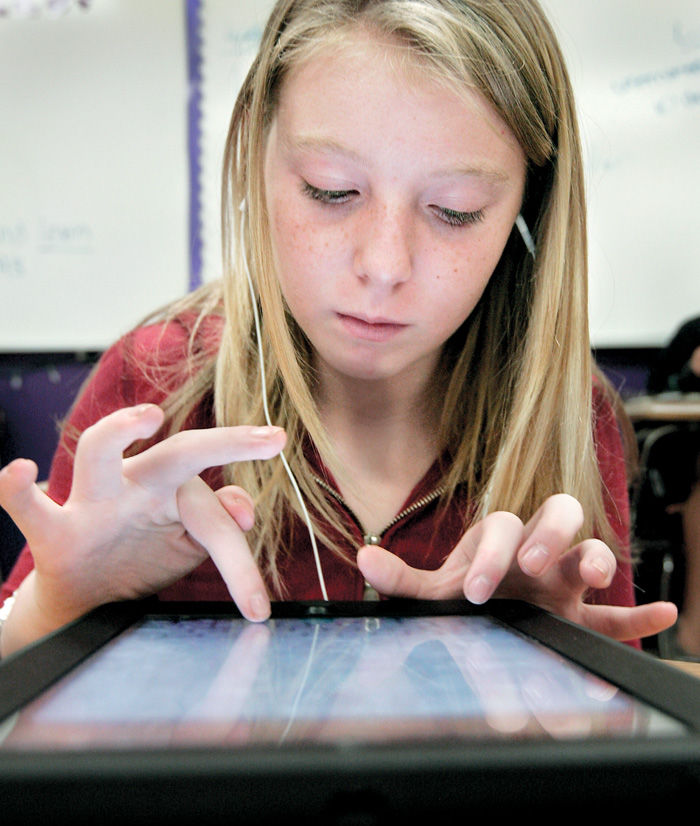 MILTON — The bell rang, and the hallways at Milton Middle School flooded with students.

Tucked under the arm of each was neither book nor calculator and in some cases not even a three-ring binder.

Instead, every student carried an 8-inch-by-10-inch iPad tablet encased in a protective plastic shell.

They migrated to their next classes. When the second bell rang, they opened their iPads and began to work on their next lessons.

This was not an experiment in technology-based learning. It's the new norm.

At the middle school, every student and every teacher has been issued an Apple iPad 2. Seventh- and eighth-graders at the school use the wireless devices the same way they once used textbooks.

Students at the school follow along with class lessons in math, language arts and science, using special stylus pens to take notes on PowerPoint-like presentations that teachers electronically send to the students' wireless devices.

They do homework, in-class work and tests on their iPads and file the work electronically with teachers. Students can even email their teacher at home for after-school questions and get instant feedback on assignments.

Shelly Kress, an English teacher and an "iCoach" at the middle school, started implementing iPads in classrooms last year, and the program has since grown.

She said it's been a godsend to give students access to technology-based learning. Before the program, the school had two computer labs with 60 computers shared by more than 500 students.

"Obviously, you didn't get in there very often," Kress said.

She said it's not unusual to see students actively helping others understand lessons, and students are bursting with confidence because most are familiar and comfortable with wireless technology.

In one of the classes, which is team-taught by teachers Ashley Sullivan and Sarah Lima, students used stylus pens to scribble notes in their iPads. The devices were loaded with a math lesson on modes and bi-modals.

The lesson moved at the students' own pace, and some students moved around to help each other understand the work. Sullivan said the devices cut paperwork and give her more time to teach.

"With class sizes getting bigger, it would take 10 to 15 minutes just to hand homework back and talk to students about what they missed," Sullivan said.

Now, that can be done immediately. Students take their devices home, get feedback from teachers at night and make adjustments on assignments immediately, Lima said.

"Some of them are like, 'You really graded my homework at 8:49 at night?' Yes. Really, I did. And then they're sending me back corrections back at 8:52 p.m. the same night," Lima said.

The devices also increase organization and accountability for students.

"The old blame the dog for eating it excuse doesn't work anymore. They've got everything with them on the iPad at one place and at one time," Sullivan said.

It cost the district $275,000 over two years to outfit every student in the school with an iPad. That's about $450 per student.

Milton Middle School Principal Tim Schigur said the district has been able to fund the iPad program without raising taxes. The school moved around budgeted funds and saved about $50,000 in class material costs—in large part by not buying textbooks and by cutting use of paper and photocopier toner.

School textbooks cost between $60 and $80 dollars apiece, according to district estimates.

The school also was able to forego purchasing new desktop computers, which was an immediate need for the school, Schigur said.

Schigur said some teachers have made cuts in their own classroom budgets to help pay for the iPads. The school saved $1,000 because it no longer has to supply calendar planners for every student. There's an iPad app for that.

School officials said the middle school is being considered by other school districts as a pioneer in classroom learning. Other districts—Janesville, Edgerton, Beloit, and Fond du Lac—have visited the school to learn about the school's iPad program.

Technology Director John Holt said technology keeps evolving, but the district's goal is to find ways to make wireless devices such as iPads more of a tool in classrooms.

He said whether iPad classrooms will spread to the high school and elementary schools is still under evaluation.

For now, Holt said, it's exciting to see at least one school embrace a new model in teaching in which the school day never really stops.

"The teacher can't always be with the kids, but through technology, neither ever really leaves the classroom," Holt said.