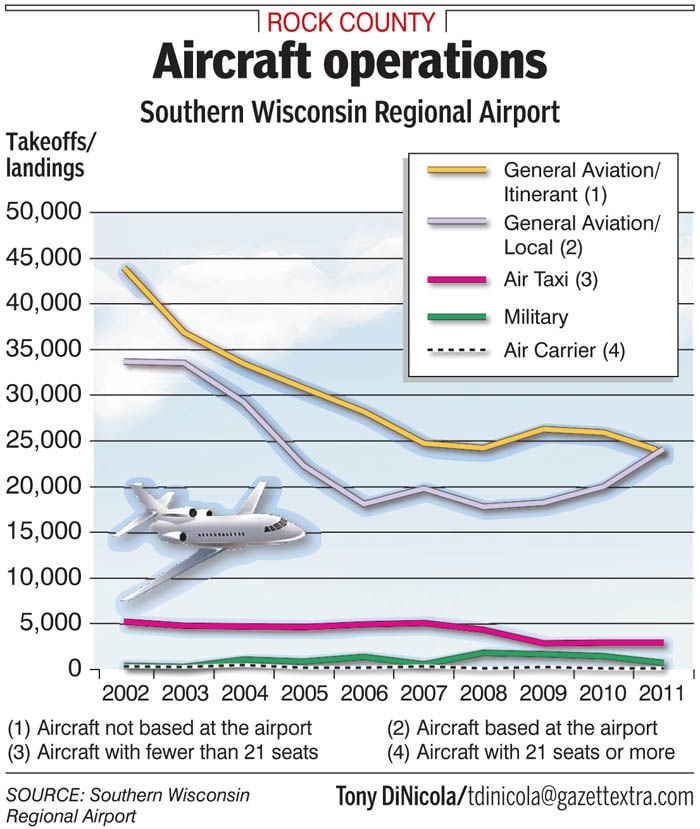 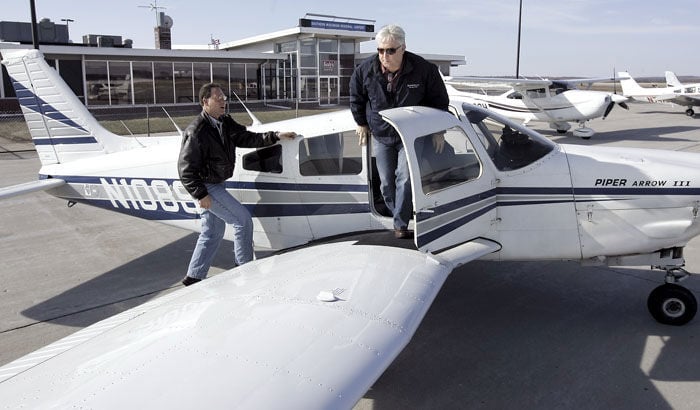 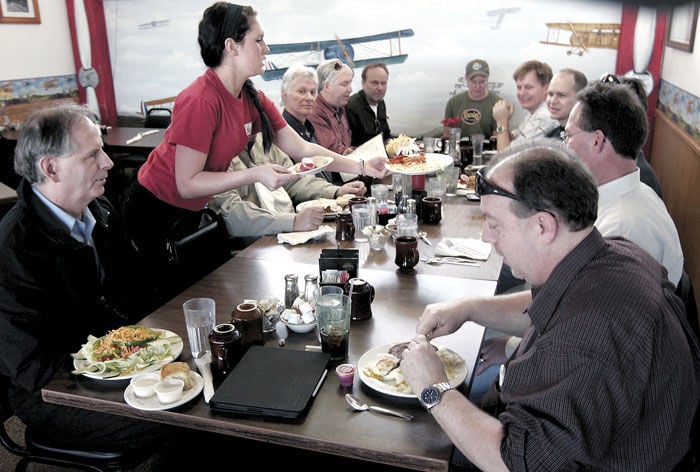 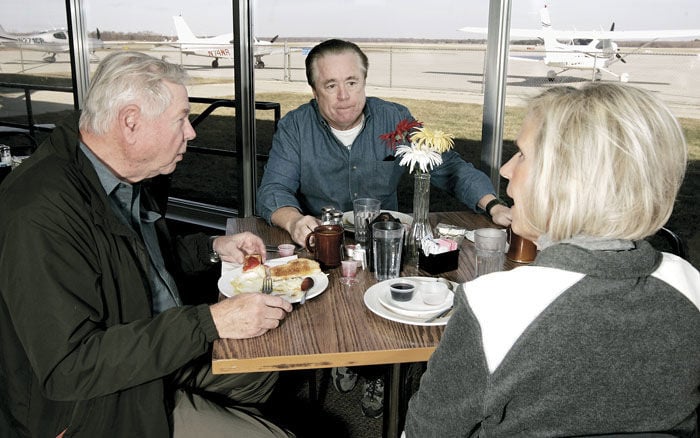 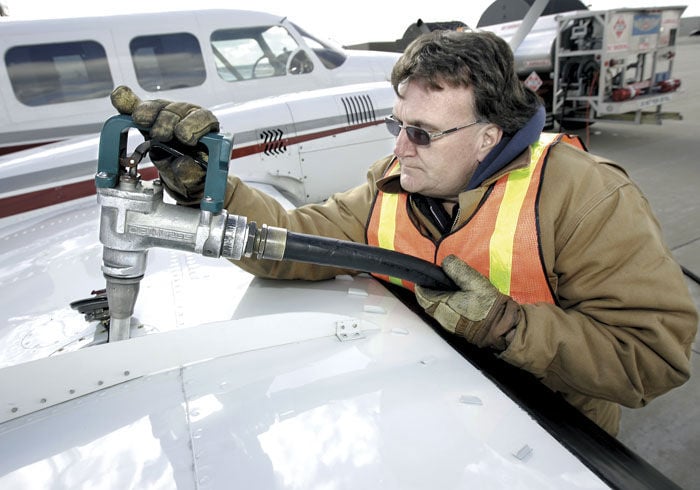 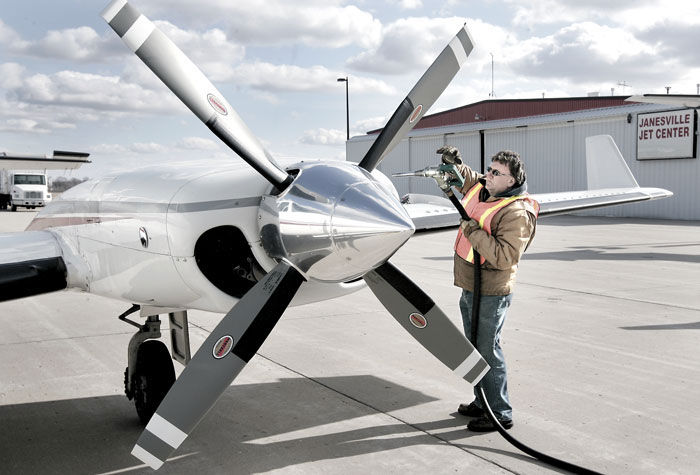 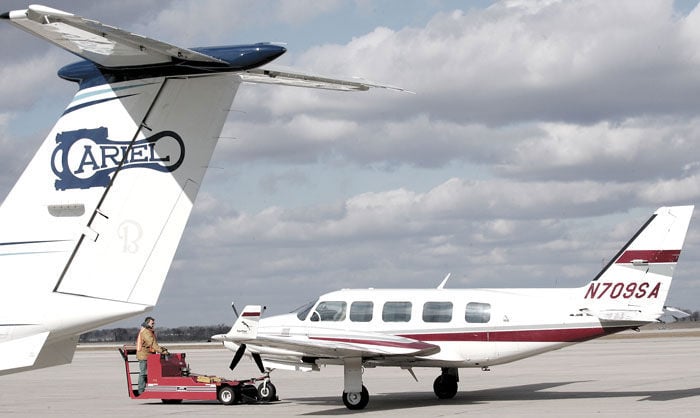 Construction could start this year on the airport’s terminal, which has had only minimal improvements since it opened in 1959.

“It’s old and inefficient, and it needs to be upgraded,” said Ron Burdick, who is wrapping up his 21st year as the airport’s director. “It’s our gateway, and when you’re trying to sell the airport as a high-ticket asset, people expect better.”

Since opening in 1947 as the Rock County Airport, the facility between Janesville and Beloit has filled the cargo and travel demands of area businesses, as well as recreational flyers, famed aviators and a U.S. president seeking re-election.

Charles Lindbergh landed in 1954 to inspect the airport as a possible location for the U.S. Air Force Academy. Fifty years later, President George W. Bush swooped in aboard Air Force One.

The airport primarily serves three constituencies: general aviation, charter and corporate travelers and businesses that depend on the facility for cargo shipments.

“Where we are at right now is that the cargo bucket has all but run dry,” said James Otterstein, economic development manager for Rock County, which owns and operates the airport.

While the number of takeoffs and landings at the airport are at a five-year high, they’re also within shouting distance of a 10-year low.

Most of the decline can be attributed to a decrease in general aviation, which accounts for the majority of activity at the airport and includes flights that originate in Rock County and those that just pass through.

The decline in cargo activity has been much more severe.

Last year, the airport handled 24,000 pounds of materials for either inbound or outbound shipments. That’s less than 2 percent of the nearly 1.5 million pounds that came through the airport in 2004.

Of course, much of that cargo was tied to the auto industry and its suppliers.

The airport, he said, was a key resource for the just-in-time inventory system of the local General Motors assembly plant, particularly when rail and truck shipments didn’t fit the bill.

It cost GM more to stop its assembly lines than it did to have parts flown in, Burdick said.

Otterstein said inventory needs have changed, and the cost efficiencies offered by rail and truck are difficult to beat.

“We are now within an eight- to 10-hour drive of the biggest market in world,” he said. “The connectivity to that is economically more efficient.”

While the airport retains its ability to handle cargo, any significant resurgence will depend on individual company demands, Otterstein said.

“This airport is a logistical heaven,” said Steve King Sr., owner of Janesville Jet Center, a full-service, fixed-base operator that includes cargo operations in its portfolio of services.

“Within three or four miles, we’ve got an Interstate corridor that’s among the nation’s busiest, two rail lines, a world-class airport and 15 million square feet of empty space.”

Janesville Jet Center is one of several businesses at the airport. In addition to its cargo capabilities, it offers refueling, hangers, ground transportation and other services for pilots.

Other businesses at the airport include those that focus on airframe and power plant repair, helicopter retrofits and repairs, flight instruction and rental and charter services.

Blackhawk Technical College offers a facility for instruction in aircraft maintenances, and Kealy’s Kafe provides restaurant services in the terminal, which also includes a pilots lounge.

Nearly 100 aircraft are based at the airport. About 80 percent are single- or multi-prop planes, with the balance consisting of jets and helicopters.

SC Aviation, a division of The Swiss Colony in Monroe, runs a successful charter service at the airport, often dispatching its jets for trips across the United States.

ABC Supply, Prent Corp. and Regal-Beloit also have corporate jets in private facilities at the airport.

“If you can afford and justify it, charter is a great way to travel, and the business community recognizes that,” Otterstein said.

That’s due in large part to convenience, Burdick said.

“You can do a one-day business trip out of this airport that might require three days if you instead travel commercially,” he said.

One of the county’s goals is to make the 1,400 acre airport as self-sufficient as possible.

The airport, which is open around the clock, has never been a moneymaker. It’s typically required tax dollars to balance its budget.

“Historically, we’ve been supported by the taxpayer,” Burdick said. “Without passenger service, it’s very difficult to be self-supporting.”

The airport started to offer passenger service in 1950 with the arrival of Wisconsin Central Airlines. That ended in 1989 with Apex Airlines and the demise of the federal government’s subsidy to Rock County.

The airport’s second-largest expense is the $180,000 that will be paid in wages to Burdick and his five employees. That expense doesn’t include control tower staff, who are contracted and paid through the Federal Aviation Administration.

The largest expense, he said, is keeping the airport’s runways and taxiways cleaned and maintained. This year, about $320,000 is budgeted for the county highway department to do just that.

“This airport is maintained to commercial airport standards, and while it costs money, it’s a selling point for us,” Burdick said. “We’re inspected every year or two by the FAA.”

Construction is expected to start this year on the first of what could be a four-phase plan to improve the airport’s general aviation terminal. The overall cost, estimated at this point to be just shy of $3 million, would require a combination of state and local money.

The first phase would involve a partial demolition of the building and construction of a new shell building, as well as the build-out and remodeling of the lobby and vestibule.

Future phases would target a redesigned restaurant, pilots’ lounge, conference room and the relocation of administrative office from the airport’s north side.

Burdick said the project is designed to use as much state funding as possible. It’s been delayed a year by funding uncertainties, as well as pending state legislation that would allow phases to be completed in shorter time frames.

“It’s a terminal that’s in need of work,” Rock County Administrator Craig Knutson said. “Over the years, we’ve made some repairs, but there’s work to be done in terms of making it handicapped accessible, energy efficient and improving the mechanicals.

“It needs to be a more usable, attractive facility.”

King bought Janesville Jet Center in 2007, a year in which the business was involved in the handling of 1.3 million pounds of freight at the airport.

Since that time, cargo weights have totaled just more than 200,000 pounds, and the staff at Janesville Jet Center has been cut dramatically.

Still, King is confident operations will rebound and the airport will be a player in the county’s economic rebirth.

“When we bought it, things were really rockin’ and rollin’,” he said. “Now, we’re just selling fuel, which gets us pennies on the gallon.

“Thank God for AirFEST, when we fuel up the Blue Angels or Thunderbirds or whoever is here.”

King said that while the economic rebound is taking longer than expected, it will happen.

The airport, he said, needs to learn from facilities in other parts of the country that have reinvented themselves.

“We need to go to school on these places that have been in our position and have the same fortuitous combination of logistical advantages that we have,” he said. “Where are they, what have they done, what can we do?

“The remodeling is a step in the right direction, but the key is logistical supply. People aren’t going to come here just because the terminal looks nicer.”

The airport, he said, needs a solid airplane avionics company that would generate jobs at the airport and bring in new business.

“We need something like Helicopter Specialties on the plane side,” he said in reference to the local company that has been routinely recognized for its growth and excellence in custom helicopter work.

“We need to replicate that story several times over,” King said.

If and when it opens a production facility just across Highway 51, SHINE Medical Technologies plans to make extensive use of the airport.

Decay sensitive medical isotopes would leave the airport several times a week, and SHINE officials have routinely cited the airport in its selection of Janesville over two other Wisconsin cities.

“That airport is more than capable of handling any of the jets that we will be using,” said Greg Piefer, SHINE’s founder and CEO. “It’s a very nice airport that’s in great condition.”

The airport is considered such an economic development asset that it’s the topic of a video nearing completion.

Rock County 5.0, a five-year, public-private economic development initiative launched in 2009 to reposition and revitalize the county's economy, expects to release the marketing video later this month.

Knutson agrees that operations have declined since GM left and the economy nosedived.

He thinks charter traffic and freight services will rebound and the airport has a significant role to play in the economic recovery.

“It’s a very important asset in terms of the business community and attracting and maintaining companies,” he said. “It’s an important economic development tool that certainly complements our road and rail infrastructure.”

1954: Charles Lindbergh visits to inspect the airport as a possible location for the U.S. Air Force Academy.

1965: Construction starts on the control tower. Located on the north side of the airport, it costs $350,000 and is commissioned one year later.

1989: The federal government informs Rock County that it will no longer subsidize air service. Passenger service ends in August when Apex Airlines makes its last flight out of Rock County.

2002: The first Southern Wisconsin AirFEST is held to honor the victims of the Sept. 11 terrorist attacks. This air show still is being held yearly.

July 2003: The airport celebrates a $13.7 million expansion and renovation of one of its runways. The 5,400-foot asphalt runway is replaced with concrete and extended to 7,300 feet, it’s load-bearing potential increased by more than five times, and an instrument landing system installed.

Here is a list of businesses operating at the Southern Wisconsin Regional Airport: